Angriff Dahlmann is a character in Atelier Firis: The Alchemist and the Mysterious Journey.

Angriff is a broadminded, aged mercenary. He is also known as Angriff the Immortal (不死身のアングリフ). He wanders from place to place, slaying a multitude of monsters. He also visits many bars in search of delicious alcohol, which he is very fond of.

The first time the player finds him, he is at Flussheim's tavern. To recruit him as a playable party member, the player has to pay a fee in Cole. He will invovle Firis in various money making schemes as the player befriends him. He also shows interest in the topic of education.

Angriff will eventually reveal that his dream is to build a school. He has lived as a mercenary since he was young and never recieved a proper education, and believes his life could be different if he had been able to study. Therefore he wants to give others the opportunities he never had. With Firis help, Angriff finds a fitting location to build his school and offers Firis to become a teacher there.

In Atelier Lydie & Suelle: The Alchemists and the Mysterious Paintings Firis states he is still working as the headmaster of his school and merchants in Merveille offer his reference works.

He joins the party upon paying him 5000 cole. After the payment, he will be recruitable at any time without any extra cost. He starts at level 25.

He uses zweihanders as primary weapons, and swords and axes as secondary weapons.

He can equip light, medium and heavy armors. 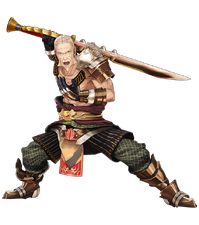 3D model
Add a photo to this gallery
Retrieved from "https://atelier.fandom.com/wiki/Angriff_Dahlmann?oldid=36907"
Community content is available under CC-BY-SA unless otherwise noted.