Anis Ryftchen is one of the main protagonists of Atelier Marie, Elie & Anis: Message on the Gentle Breeze.

Anis studied alchemy at an academy in a country south from the kingdom of Schigsal and came to the city of Salburg to study to become a teacher. Anis was born in Domheit, but her family moved to the south when she was very young. Her family was upper class and got in contact with the southern academy through work. The kind principal explained alchemy to Anis, who then officially enrolled at the academy. But she also went through monetary troubles and had to rely on the support of others to graduate.

After graduating, Anis travels to Salburg to start an internship to become a teacher.[1] Anis works under Ingrid at the academy in Salburg, and writes her own alchemy book for the academy of her own country at the same time. She becomes overwhelmed with the amount of work she's taken on. Ingrid introduces Anis to Marie and Elie who offer their help in writing books. [2]. After the three agree to help one another, she will become available as a playable character. However, since it's only possible to have two active protagonists at one time, either Marie or Elie have to be switched out for Anis.

She is always followed around by her childhood friend Saiid Rauy, who has proclaimed himself her "bodyguard". Since Anis was very lonely during her childhood, he promised her in the past to never leave her alone. Saiid still treats her as if she was a noble, which bothers her along with his overprotectiveness. Anis is constantly embarrassed by Saiid's behavior and enthusiasm over a silly promise they made as children. However, when Anis finds herself all alone she truly misses him and gets angry that he broke her promise. Saiid remains by her side to the very end of the game, where they go back to their homeland together. If Anis is alone in the workshop on August 15th, Saiid will ask her to go to the summer festival with him.

There are some events that can only be viewed when playing as Anis, especially events related to Saiid. However, there are also many events that cannot be triggered at all when playing as Anis. At the end of the game, Anis will always leave Salburg and the only ending she's featured in is To the Southern Lands. It is also possible to play through most endings of the game without recruiting Anis even once. Her endings rely on the number of books that have been written. [3].

Unlike Marie and Elie, she will not start out equipped with her ultimate staff and is considerably weaker as both an alchemist and an adventurer. Elie possesses better alchemy abilities, while Marie specializes in adventuring.[4]. However, Anis gets a success rate bonus in every element and the workshop gets messier at a slower pace when she's on duty compared to the other two.[5]. If trained, she can become a very useful alchemist. Her ultimate weapon is Staff of Rainbows and Skies and her special attack is Waltz of Rainbow and Skies. 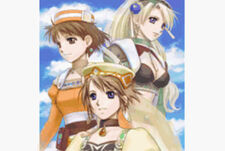 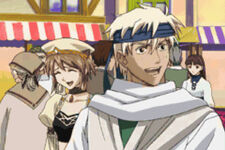 Anis and Saiid at the Salburg summer festival 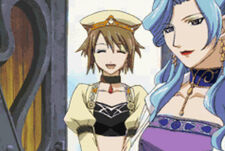 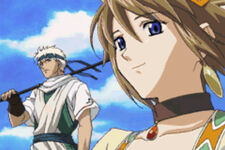