"Of course. I'm sure I can do anything if I put my mind to it."
— Astrid, Atelier Rorona

Astrid "Asty" Zexis is a character in Atelier Rorona: The Alchemist of Arland and Atelier Meruru: The Apprentice of Arland.

Astrid is the greatest alchemist in all of Arland, and is also teacher to the great Rorolina Frixell. Although known to be an extreme genius, she is not very liked by many people, as she's extremely lazy and rude, speaking with a barbed tongue. Some say that she's a witch due to her mysterious nature, and it's rumored she can hear somebody talking about her anywhere in the world.

She is a sharp and observant person, and would rather watch from afar than take any sort of action of her own. She is the only person capable of doing the near-impossible and creating a human from alchemy, called a Hom, who she gives to Rorona. She purposely created Hom an inch and a half taller than Rorona's best friend Cordelia, just to mock the girl.

She's bitter and hostile towards most people, and will only do things if they interest her. She was in a brief relationship with Sterk, but things failed to work out due to the severe differences in their personalities. It's later revealed that Astrid's cold attitude is due to the mistreatment of her master, who she respected and cared for greatly. Her master was looked down on by the people of Arland and was eventually exiled due to her lack of alchemy skills. Her master died shortly after being exiled, which caused Astrid to hold a great deal of resentment towards people.

Astrid leaves Arland after the events of Atelier Rorona, and is not seen for several years, prompting Rorona to also leave Arland in search of her.

Years ago, Astrid saved Rorona's parents from a terminal illness, and took Rorona as a pupil in Atelier Rorona: The Alchemist of Arland, as the Frixell's are indebted to Astrid. She is not a good teacher however, and would rather sleep all day than teach Rorona any sort of alchemy. When Sterk comes to the shop to deliver a message for Astrid, she seems disinterested and orders Rorona to go and recieve the message instead.

When it's revealed that the Ministry is threatening to close down Astrid's workshop, she doesn't seem to care. She changes the name of the shop to "Atelier Rorona," and entrusts Rorona the workshop, knowing that Rorona is indebted to her. Astrid watches from afar as Rorona works to save her workshop.

Astrid will ask Rorona if she would want a sister or a brother. Astrid will then create a Hom (male or female, depending on the player's answer). Astrid will take the Hom with her when she leaves Arland at the end of the game, but will allow Rorona to use the Hom temporarily to help her. She leaves Arland to set up an alchemy shop in her Master's hometown to honor her memory.

Astrid does have her own ending to the game which can be witnessed by befriending Astrid and triggering certain events. In Atelier Rorona Plus, she is a playable party member, unlocked late in Year 3. She starts at Level 50 and costs 9980 Cole to hire, making her extremely overpriced to bring on most gathering trips, but she is also extremely powerful and can be very useful for dealing with the tougher Overtime dungeon content.

The 3DS version includes an additional mode, Atelier Astrid, that is played from her perspective during the events that lead her to saving Rorona's parents.

After Astrid left Arland after the events of Atelier Rorona, it takes Rorona nearly 12 years to be reunited with her master and Hom. Sometime after being reunited, Astrid has Rorona drink a Youth Potion. Astrid tested the potion on herself and gives it to Rorona after the potion is successful. Unfortunately, it doesn't have the same effect on Rorona, and she is turned 8 years old instead of 14. Astrid plans to bring Rorona to Totori, and travels to Alanya Village only to find that Totori isn't in Arland anymore.

Astrid travels with Rorona and Hom to Arls, where she finds Totori's workshop. She claims to want to work on an antidote for Rorona's condition, and leaves Rorona in Totori's care. Astrid also allows Meruru to use the Homs to help her with her alchemy.

She sets up her own shop in Artisan's Way where Meruru can buy rare alchemy supplies. Astrid uses the shop as her own personal workshop, and is trying to formulate a new Potion of Youth that will reverse the potion's effects. After Meruru breaks the vial of potion, Astrid will ask her to make another one.

Astrid is available as a playable character only in Atelier Rorona Plus. She becomes available at the start of the third year. She joins at level 50 (the maximum before Overtime), and starts with a Friendship level of 100 and a payment requirement of 9980 cole per trip. Her initial equipment is a Dharma Ring and Normal Threads.

Astrid is an offensive character, with skills that both deal damage and reduce the enemies' stats. 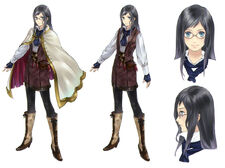