Role Playing Game
Atelier Annie: Alchemists of Sera Island (アニーのアトリエ ～セラ島の錬金術士～) is the 2nd of the Atelier games released for the Nintendo DS. It is the first handheld Atelier series game released in the US, and the first of the US Atelier games to use the original game formal, as opposed to the more linear Atelier Iris: Eternal Mana and related titles.

Annie Eilenberg was a lazy girl who hoped to marry a rich man and never have to work in her life. Annie's worried parents consulted her grandfather, who was a great alchemist. He then decided to send her to Sera Island in order to push her to overcome her laziness and for her to become an Alchemist as well. His homunculi kidnap Annie and take her to Sera Island, where she becomes a reluctant participant in a competition to develop Sera Island's resort.

She winds up under the tutelage of Pepe, a fairy who her grandfather sent to teach her alchemy. Annie then meets Hans Arlens, a member of the island's development committee. He escorts Annie to a ceremony, where she learns the rules of the competition and also the prize: being able to marry the king's son or daughter, as well as the title of Meister. Annie, viewing the prince as the ultimate in "marrying up", decides to work hard in the competition in order to win.

The game features seven different endings which are determined by the player's actions.

The alchemists were gathered to develop Sera Island into a resort and compete in alchemy contests to improve the island. Many of the alchemists take work from the adventure's guild in order to gain money and notoriety by creating items for clients.

See List of Characters in Atelier Annie for more 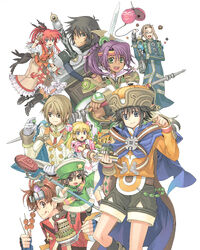 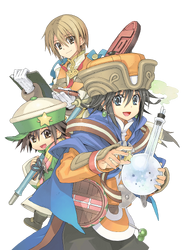 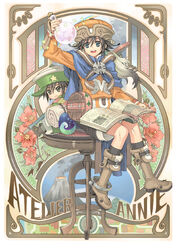