Atelier Lydie & Suelle: The Alchemists and the Mysterious Paintings

It is a direct sequel to Atelier Firis: The Alchemist and the Mysterious Journey, making it the third (and final) game of the Mysterious sub-series and the 19th main Atelier game.The theme of the game is "paintings".[5]

The game takes place 4 years after the events of Atelier Firis: The Alchemist and the Mysterious Journey.[6]

The story starts with twin sisters Lydie Malen and Suelle Malen, the protagonists of the story. Lydie and Suelle live in a small alchemy atelier with their father, Roger Malen, in the city of Merveille, the capital of Adalet Kingdom. They wish to run the kingdom's top atelier someday, and while they are hardworking, they don't get a lot of business and survive on a bare minimum.

One day when synthesizing, they hear a voice from the basement their father has forbidden them from entering. Since their father isn’t home, Suelle convinces Lydie to go to there. There, they find a painting and are magically teleported to the world in its interior, where they find a woman (that they try to follow without success) and a lot of materials for alchemy.

When they finally discover the way back home, their father is at the basement. However, the girls ignore his complaints and run with excitement to the cauldron since the materials they gathered in the painting are still in their basket. They craft their best item up to the date, but despite wanting to return to the painting to gather more materials, their father forbids them to enter the basement again. That night, Lydie tells Suelle that the woman in the painting (who they could only see their back) looked a bit like their deceased mother.

The goal of the game is to raise the evaluation of the twins' atelier to the top level by taking on challenges in Merveille. When the Atelier Rank increases, the player gains access to new paintings to explore. Rare materials can be found inside the worlds of the paintings, which are used to improve Lydie and Suelle’s alchemy skills.[7]

Unlike most examples of dual protagonists in the series, the player won't choose a single character of the two to control. Lydie and Suelle will advance the story together but the player can switch between them on screen[8].

The battle party consists of three pairs (six participating characters in total). The front character in each pair can be controlled through player input, while character in the rear will act when a follow-up condition is triggered. It's possible to synthesize in battle through the Battle Mix system, which uses possessed items to instantly craft a new item.[9]

Atelier Lydie & Suelle features two female protagonists named Lydie Malen and Suelle Malen. The girls are twin sisters, are both 14 years old and run a small atelier in Merveille, the capital city of the Adalett Kingdom. Lydie is the older twin. She is gentle, a bit of an airhead and has a unique sense for art. Suelle is the younger twin. She is a cheerful, tomboy genius, and is afraid of insects.[10]

In addition, another new characters as well as some returning protagonists from the previous Mysterious games - Sophie from Atelier Sophie and Liane, Firis and Ilmeria from Atelier Firis, respectively - also appear in this entry.

Lydie and Suelle Malen are designed by Yuugen and NOCO respectively. NOCO's character does not use a staff as her main weapon, and instead uses dual guns. Lydie follows tradition and uses a staff.

The game was announced during the Atelier 20th Anniversary Presentation, where it was said that it's part of the Mysterious series but is being made differently from the previous entries of the aforementioned series.[11] NOCO and Yuugen both return as the illustrators for this entry, and designed one protagonist each.

A total of 21 downloadable elements (DLC) were released for the game. A Season Pass containing all the DLC is also available. 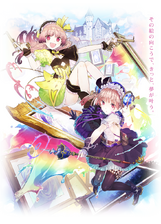 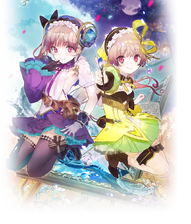 Retrieved from "https://atelier.fandom.com/wiki/Atelier_Lydie_%26_Suelle:_The_Alchemists_and_the_Mysterious_Paintings?oldid=36701"
Community content is available under CC-BY-SA unless otherwise noted.