Atelier Marie, Elie & Anis: Message on the Gentle Breeze (マリー、エリー&アニスのアトリエ 〜そよ風からの伝言〜 Marī, Erī & Anisu no Atorie ~Soyokaze kara no Dengon~) is a role-playing video game developed by the Japanese game developer Gust and Banpresto for the Gameboy Advance. The game is only available in Japan.

It builds upon the story and mechanics of Marie & Elie: Two People's Atelier, and introduces a brand new protagonist named Anis Ryftchen in addition to the returning two.

The two alchemists Marlone (most commonly refered to as "Marie") and Elfir "Elie" Traum run a workshop together on the Artisan's Way in the city of Salburg. It's not a big business, but their reputation is steadily going up. One day, their past teacher Ingrid requests them to write books for the new library that is being built. The library will be finished in 5 years, so they are requested to write at least one book every year during that time.

During the years, Marie and Elie are introduced to Anis Ryftchen, a young alchemist studying to become a teacher. While Anis initially seems cheerful, it's soon revealed that she is overworking herself. Anis is struggling to keep up with both her work at the academy and her vision to write books for her school back in the Southern Country. Marie and Elie offers to help her, but this is ultimately up to the player to choose.

The main goal of the game is to create new items and recipes for several books over five years. The events and outcome of the game will differ depending on the content created for the books.

Like in Marie & Elie: Two People's Atelier, the player can switch between playing as Marie or Elie, and later Anis. The player can let the two work independently from each other, performing different actions simulateneously, or let them co-operate. However, only two protagonists can be active at the same time.

Normal synthesis is simplified compared to the mainline Atelier-games succeeding Atelier Marie: The Alchemist of Salburg. Item quality and effects cannot be modified. However, the game features a new to the series "Image Mixing" system. This system is used to alter existing recipes to create new items that can be featured in books or used as ordinary items. The "synthesize together" command has been carried over from Marie & Elie and can be used already at the start of the game, but the Trust stat between the protagonists carries less importance.

While synthesis can only be performed at the workshop, the player can visit a big variety of cities and locations to gather materials, hire adventurers, listen to rumors and interact with townspeople.

Combat is turn-based and the player can use commands such as Attack, Item, Run, etc. Every character has their own unique special move that startes off as being fully charged, but after using it several turns will be needed for the special move to recharge and become available again.

One of the new features is being able to buy paintings. Similar to the Fairy vendor, the art vendor will visit the workshop time to time. The paintings range from incredibly cheap to very expensive, and can be viewed in the second floor of the workshop. These do not provide any benefit in terms of gameplay, but lets the player view scenes from the characters' daily life. 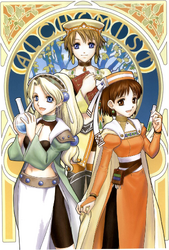