Atelier Marie: The Alchemist of Salburg

Atelier Marie: The Alchemist of Salburg

Atelier Marie: The Alchemist of Salburg (マリーのアトリエ ～ザールブルグの錬金術士 ～ Marī no Atorie ~Zāruburugu no Renkinjutsushi~) is the first game to be officially released in the Atelier series, and the first in the Salburg trilogy.

Atelier Marie is a Japanese exclusive game, but has been ported to many other systems since its original release in 1997. With each new release, a new "version" was completed with its own set of updates. The Sega Saturn version, for example included an internal clock while other versions did not. Atelier Marie Plus was released on June 4, 1998, and is the last version (Version 1.3) of the original game, with upgrades and additional content added.

Atelier Marie has been released on many different systems, but most of those ports have received various small updates. When the game was ported to the Sega Saturn (known as Version 1.3), a 7th ending was added to the game as well as numerous unique events and minigames. Another Version 1.3 feature was support for the Saturn's internal clock. This allowed Marlone to make comments when you stayed up late to play, or if you played on holidays or her birthday. The PLUS version of the game, which was released on PlayStation, contains all the features of Version 1.3, except the internal clock feature, since the PlayStation lacks that capability. The only addition to the PLUS version was DualShock support. The PS2 version features updated graphics such as animated backgrounds and a new UI, as well as changes to the game's balancing. The original prologue was also replaced with a new one. The mobile version uses some of the updated graphics from the PC version. The balancing remains the same as the original Plus version, but the item Blessed Wine was renamed to Blessed Holy Water instead.

Atelier Marie takes place in a fantasy medieval world of magic, however, as the narrator soon points out, most people actually live quite ordinary lives. As the grand adventures are left to the few chosen ones, the wide majority are content with their mundane lifestyles as long as there's peace in the world.

Capital of Schigsal Kingdom, Salburg, is home to the famous Salburg Academy, which specializes in the studies of alchemy. The school is revered as producing some of the best alchemists on the entire continent. The game's main protagonist Marie is getting the worst grades in the academy's history. Despite her embarrassment, Marie constantly tries to improve herself, but also constantly fails. Miserably failing at alchemy, her instructor Ingrid decides that Marie needs to be taught with unconventional methods.

Ingrid allows Marie to open her own workshop to practice her alchemy outside of class while still continuing her studies. Marie will have five years to create an item using the skills she has learned through alchemy. If Marie is able to create an item that is to Ingrid's satisfaction, Marie will graduate in five years' time.

The game features 7 unique endings (6 in the original version), and the player's final ending will be determined based on the player's actions throughout the course of the game. Depending on the player's playstyle, Marie may end up in a variety of life paths such as further pursuing academia or becoming a conventional fantasy hero.

Marie can synthesize items at the workshop. The method of making items is very simple, as items do not have qualities or traits like they do in newer Atelier releases. Marie's chance of success increases with her level, and each item requires certain ingredients. The player can also purchase tools to raise the rate of success. Synthesis consumes MP, as well as builds up Fatigue. The success rate goes down in proportion to the value of the Fatigue stat, and items simply cannot be crafted if Marie does not have enough MP. The success rate is also affected by how clean the workshop is.

There are four categories of items that you can create, and you can create more items through recipe books that can be purchased from the academy or read at the library. A complete list of items can be found here.

Gathering is based on a menu that is presented when Marie visits a place outside of town. The player will be given three options:

Marie is able to take tasks from the Tavern to earn popularity and money. The more popular she becomes, the more likely that high leveled adventurers will want to accompany her outside of town.

Battle is turn based, and the active party can consist of three members. Marie can hire adventurers to accompany her to areas outside of town. Each character will have a basic set of commands: Attack, Defend, Change Position, Special Ability, Use Item, and Run. However, characters cannot attack without first equipping a weapon. Marie has a maximum level of 50. She gains experience by synthesizing items and by fighting enemies.

Depending on Marie's achievements, she'll be visited by the fairies and be given a Fairy Bracelet. There are three main types of Fairies - the door-to-door merchant Fairy, the cleaner Fairy, and hireable Fairies. The merchant will offer items from the Fairy Forest that are difficult or impossible to find on one's own. The Cleaner Fairy will clean Marie's workshop, and the hireable Fairies will do synthesis or gathering for Marie in exchange for money. The synthesis capabilities, working speed and salary depends on the Fairy's color.

Mini games were added to the game in the Sega Saturn port and onwards. These often occur in connection to an important synthesis or a rare material. Some can be avoided - as an example, the cheese mini game can be avoided if the player purchases a mouse trap from the academy shop.

The game begins in Autumn on the first of September and ends five years later (worth of in-game turns or "days"). There are four seasons and many materials can only be found according to these, and several events are tied to the season as well. The player will have to adhere to deadlines for quests as well as plan their actions around the seasons. Important dates include the royal knight's monster hunts, the academy shop sales, and the yearly solar eclipse.

The original game featured six different endings. A seventh ending was added in Atelier Marie Plus. 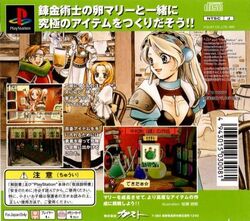 Back cover of the original version's game cover. 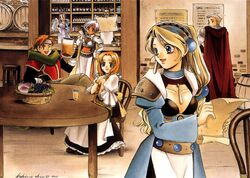 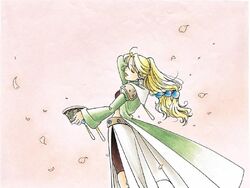 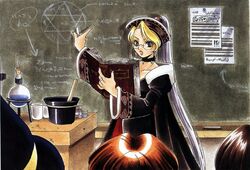 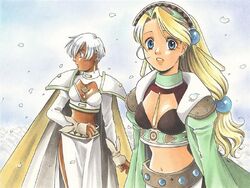 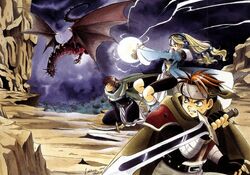 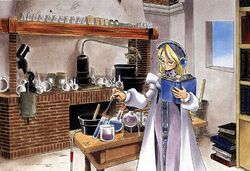 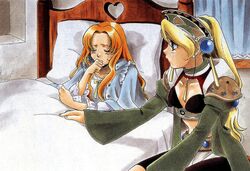 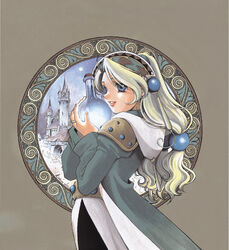 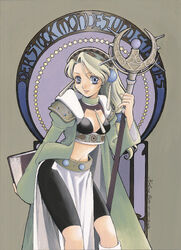 The game had a dedicated i-Mode site called Atelier Marie i (iマリーのアトリエ) that was established by Bothtec in 2003. Various games, ringtones and wallpapers were available for download from this service.

Later in 2006, a company called Nihon Enterprises created a newer set of mobile content. These included:

The game's illustrator Kohime Ohse did several comics based on the game. One was a five chapter long short series about Marlone's first job as an alchemist, trying to cure a kind old man that lives next doors to Schia, which was published in The PlayStation issues 63-67. There was also a series of yon-komas published in Dengeki Playstation vol 51-53, as well as a one-shot about a love story between Marlone and Kreis in Virtual Idol vol 5. All of these were later collected in the artbook The Art of Ohse Kohime: Atelier Marie.

There were also several comic anthologies based on the game, some of them crossovers with other titles in the Atelier Series.

Marlone's voice actress Haruna Ikezawa hosted a radio show based on the game as the character. The show featured segments such as "synthesis of the week" involving mixing drinks and food items with a blender, and radio dramas which later released as a series of CDs (also including unaired stories).