Atelier Marie & Elie: The Alchemists of Salburg 1・2 (マリー&エリーのアトリエ ～ザールブルグの錬金術士1・2～) Atelier Marie & Elie ~ Salburg no Renkinjutsushi 1.2 ~ is a role-playing video game, or rather pair of games, developed by Gust and published by Kool Kizz on November 15, 2001 for the Sega Dreamcast. The title is, effectively, a compilation of Atelier Marie Plus and Atelier Elie with a few minor graphical improvements. The compilation was only released in Japan.

A similar port was released in 2005 for the Playstation 2, titled "Atelier Marie + Elie: The Alchemists of Salburg 1+2". This version features more heavily re-worked graphics for both games, essentially re-scanning or re-drawing all of the original art from the PS1 releases and increasing their resolution to make full use of the PS2's ability to display at "true" 640x480 standard definition.

Note: The screensaver included on the disc contains a virus. http://www.theregister.co.uk/2001/11/30/dreamcast_game_spreads_virus/ 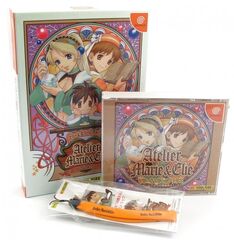 Packaging for the Japanese Sega Dreamcast 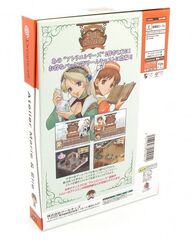 Back of the box
Community content is available under CC-BY-SA unless otherwise noted.