Atelier Meruru is the direct sequel to Atelier Totori: The Adventurer of Arland and is the third game in the Arland series. Contrary to the previous Arland games, Atelier Meruru is set in the kindgom of Arls rather than Arland. It features many new and recurring characters and an updated battle system.

"Arls Kingdom - this tiny nation is located far to the northwest of the Arland Republic. Compared to Arland, with its highly developed machinery and alchemy, Arls is rather quaint, but with unlimited potential for prosperity. Gio, leader of Arland, proposes to Lord Dessier, King of Arls and Gio's longtime friend, that Arls joins the Arland Republic. But there are many tasks to be completed before their goal can be realized. In order to minimize criticism from opposing parties, Arls begins a development project to increase the kingdom's influence. To begin, they decide to dispatch a number of skilled adventurers to Arls from Arland. Among the delegation is the alchemist Totori Helmold. Meruru, princess of Arls, soon encounters Totori, and alchemy, for the first time. Impressed by Totori's alchemic abilities, Meruru forces her way into becoming Totori's apprentice with aspirations of becoming an alchemist in her own right"
— Story extract from the official website

During the events of Atelier Totori, Gio, the ruler of the Arland Republic, was visiting his old friend Dessier, king of Arls, a small rural kingdom far from the republic of Arland. It was then when Gio proposed Dessier to merge with Arland. The merging plan, however, didn't start until one year after Totori's adventure came to an end.

Unlike Arland, Arls doesn't utilize alchemy or see its widespread practice. Because of this, Arland decide to send a skilled alchemist to Arls. This alchemist happens to be Totooria Helmold, who opens a small workshop on the outskirts of town. Princess Merurulince Rede Arls (which pays no attention to Arls' politics and often sneaks out of the castle) soon meets Totori and start taking up a new interest in alchemy. Meruru often visits "Miss Totori" to learn more about alchemy. During the game's prologue, Totori will send Meruru and her best friend Keina Swaya to gather alchemy ingredients to a nearby forest. While out, Keina is attacked by a group of carrot bunnies. After their victory, the girls return to Arls.

As they approach town, Meruru is confronted by the castle's royal butler Rufus Falken. Rufus makes Meruru return to the castle, and she's forced to confront her father. Angry that she's escaped the castle yet again and even left town, Lord Dessier refuses to listen to her dream of becoming an alchemist. He insists that she must perform her royal duties as a princess, and that they must prepare for the merging with Arland in five years. Meruru disagrees, and the two argue. She eventually storms out of the throne room, frustrated. She is still determined to become an alchemist, much to her father's chagrin.

Meruru goes to Totori's workshop to bring the gathered ingredients from the forest and to also inform her of the bad news. Although Meruru wishes to be an alchemist and considers herself Totori's apprentice, Totori reminds her that she will be unable to become an alchemist without her father's blessing. Meruru vows to stay in the workshop until her father agrees to let her become an alchemist.

Meruru mentions that her father is concerned about her royal duty to Arls. Totori decides that she'll go and talk to Meruru's father. She ensures Meruru that speaking to Lord Dessier and Rufus will give her some ideas of how to fulfill her duties, and possibly convince them that Meruru should be an alchemist. Although skeptical, Meruru gives in to the idea, and Totori goes to the castle. A short time later, Totori returns to the workshop after speaking to Lord Dessier. She tells Meruru that her father has summoned her and to return to the castle immediately. Upon her return, Meruru is confronted by Rufus. He has found a way for Meruru to not only perform her royal duties, but to also include her love of alchemy. Rufus explains that through developing the kingdom and helping its people with the power of alchemy, she will be fufilling her royal duties. Rufus hands Meruru her first "task", which is to deliver a Plain Pie to a soldier in Moyori Forest. Although she doesn't quite understand, she goes with her gut and heads straight to the workshop.

After synthesizing the pie and delivering it to the soldier in Moyori Forest, she returns to the castle to inform Rufus of a job well done. Rufus compliments her on completing the task, but also reminds her that she has yet to talk to her father. When Meruru speaks to her father, she is pleased to hear that he realizes how serious she is about alchemy. He even gives her a blessing to practice alchemy, under the condition that alchemy should be used to develop the Kingdom. If Arls' population fails to reach 30,000 people in three years time, Meruru will have failed her royal duty and will be forced to quit alchemy. If she succeeds, then she will be allowed to continue practicing alchemy.

Atelier Meruru introduces the Cost Turn Battle System, where a character's speed and the "wait" (abbreviated as WT in-game) assigned to individual actions influence how soon a character's next turn will come. Turn order is displayed in a queue of 16 spaces.

The Assist System has also been adjusted around two of Meruru's skills, Power Item and Potentialize. After two offensive assists, Meruru may use an item again with a more powerful effect. After a Power Item use, a Coordinated Attack is possible, a special assist attack involving both of Meruru's companions at once, further allowing a follow-up from Meruru of a third item use even more powerful than a Power Item.

Specials now change depending on whether they finish off an enemy; specials that finish off enemies are accompanied by character-dependant musical themes and flashier, more elaborate animations.

Also, during synthesis, two traits may now combine to form more powerful or multi-faceted traits at the expense of being disallowed a choice between the two (unless those traits are applied to the item multiple times) and being relatively costly

A total of 5 downloadable elements (DLC) were released for the original PlayStation 3 version of the game. Further releases of the game (Atelier Meruru Plus and Atelier Meruru DX) included all the DLC.

As with its predecessor Atelier Totori: The Adventurer of Arland, an enchanced version of the game was released for PlayStation Vita under the name Atelier Meruru Plus: The Alchemist of Arland 3 (メルルのアトリエPlus ～アーランドの錬金術士3～). The game includes all the DLC for the Playstation 3 version, a new Dressing Room feature where the player can change the appearance of Meruru, Totori ,and Rorona, and various gameplay and mechanics changes from the Playstation 3 game. The "About Time" ending was originally exclusive to Atelier Meruru Plus, but was later added for the Japanese Playstation 3 version in a downloadable patch (Patch ver 2.02).

If the player possesses a Atelier Totori Plus save data, they can unlock a special costume and accessory for the Dressing Room and obtain the strongest weapon for Totori at the start of the game. Later, support for Atelier Rorona Plus save data was patched in. This allowed the player to view the new scene "Neo-Prologue - Future Potential" from the Extra section, as well as "Neo-Finale - Goodbye for Now" if the player have beaten the extra year in Rorona Plus.

Atelier Meruru Plus is available in "standard edition", "Premium Box/Limited edition", and downloadable form for Japan and Asian regions.

The first press edition of Atelier Meruru Plus came with a download code for an in-game accessory and outfit. There was also exclusive outfits for Famitsu and Dengeki.

A limited edition of the game, called Atelier Meruru Plus: The Alchemist of Arland 3 Premium Box (ルルのアトリエPlus ～アーランドの錬金術士3～プレミアムボックス) was released for Japan and Asian regions. It contains the game, a "mini crystal paperweight", and a Atelier Meruru Plus custom skin shell for Playstation Vita.

On July 10th, 2018 a port of Atelier Meruru Plus for Nintendo Switch and PlayStation 4, titled Atelier Meruru DX, was announced. It was released on September 20th, 2018 in Japan and on December 4th, 2018 for the rest of the world. A PC Steam version became available the same day as the international release. The game can be purchased individually or as part of a pack (Atelier Arland Series Deluxe Pack) containing the DX versions of Atelier Rorona, Atelier Totori and Atelier Meruru.

While the main game is virtually identical to the Plus version, the DX version adds the ability to sprint and to fast-forward through battles as well as including the pre-order costumes from the previous versions in the base game.

The game includes two new events (originally exclusive to the Japanese Plus version) that connect with the extra year in Atelier Rorona Plus. These scenes, titled "Neo-Prologue - Future Potential" and "Neo-Finale - Goodbye for Now", take place before and after that extra year, respectively. They can be viewed anytime in the movie gallery inside the "Extra" feature from the main menu. They are presented with Japanese audio only in all versions. Additionally, the end credits have a scene teasing Atelier Lulua: The Scion of Arland.

The game was adapted into a two volume comic series with the same name as the game by Hideyu Tohgarashi and published by Kadokawa Shoten . During it's run, the manga covers major kingdom developments such as Arls National Mine, Hart Outpost, Yuvel and the fight against Airshatter. Several character-focused stories were also included such as Ending - Mimi, Ending - Rorona, and Ending - Keina. While the manga ends with the Admission Ceremony rather than one of the Endings, there is a bonus chapter based on the hotspring event and ending.

Referencing the newspaper feature in the game, nearly every chapter ends with a news report about Meruru's progress. 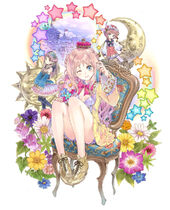 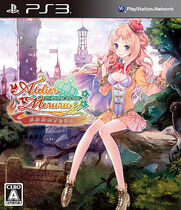 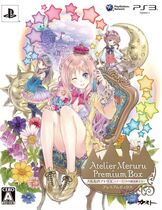 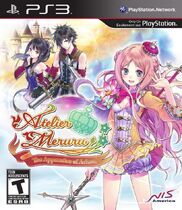 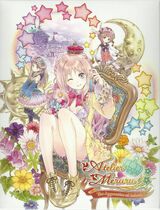