Atelier Ryza: Ever Darkness & the Secret Hideout (Japanese: ライザのアトリエ ～常闇の女王と秘密の隠れ家～, Ryza no Atelier ～Tokoyami no Joou to Himitsu no Kakurega～) is a 2019 JRPG for the PlayStation 4, Nintendo Switch and Microsoft Windows.

It's the 21st main entry in the Atelier series, and the first entry in a new sub-series of games. The theme of the game is Summer Memories. It was followed by a direct sequel, Atelier Ryza 2: Lost Legends & the Secret Fairy, which released on Winter 2020.

The game follows the story of Reisalin Stout, a girl living on Kurken Island seeking adventure. One summer day, she finds an abandoned rowboat and ventures to the mainland with her friends Lent Marslink and Tao Mongarten. Along the way, save the daughter of a traveling merchant and meet the alchemist Empel Vollmer with his companion Lila Decyrus, which starts Ryza on the path of learning alchemy and her interlining adventures and soon discover the real truth about her home.

Atelier Ryza features a variety of gathering tools such as axes, hammers and scythes. Using different tools on the same gathering spot allows the player to obtain different materials. For example, in a tree you can use the axe to get lumber, the staff to get fruit and the scythe to get wood chips.

Gathering areas can be created with alchemy. With different materials, players can tune the type of field, the obtainable items and the enemies present. These areas can also be shared with other players.

A new real-time, turn-based system is introduced. During battle, time continuously passes, and characters and enemies can only act when it's their turn, without time stopping. Up to three characters can take part in battles, and the player can switch freely which one to control, while the AI takes care of the other two.

The MP bar, present in every previous entry, is replaced by a shared AP (Action Points) system. Action Points are gained during the course of the battle, and they are used to trigger skills. During combat, the new "Tactics Lever" meter increases. This system serves to boost skill effects.

Follow-up attacks between party members can be triggered with "Action Orders", and an ultimate attack once the Tactic Level is fully maxed called "Fatal Drive" can be activated when a party member is waiting for an order.

The difficulty can be changed from Very Easy to Legend and can be accessible at all times in settings.

For more information, go to Atelier Customization (Atelier Ryza)
The appearance of Ryza's atelier can be customized. The interior walls, exterior walls, floor, roof, terrace, and rug can be changed to one of several themes with bonus effects, varying from weather conditions or rare chance of appearances. Inside the secret hideout also consists a sofa, bed, and table that can also be customized, with some of them exclusively changed differently from the exterior customization.

The game was first teased on 23 May, 2019, when the Gust Youtube channel posted a short video teasing their next game. The video showed a clip of four characters standing in a field of grass under a blue sky, followed with a text ("our adventure is about to begin") and then the announcement of more information coming the 28th of the same month.[1] The teaser trailer was hosted in a temporary website, but since the game was officially announced the site shows a link to the official Atelier Ryza website instead of the teaser video.[2]

Two days after the teaser, the magazine Dengeki PlayStation revealed that the teased game was called Atelier Ryza and that it was expected to be released for the PlayStation 4 in autumn. The magazine interviewed the producer, Junzo Hoso, who revealed many details about the title.[3] Among other things, he confirmed that the development of the game started around July 2018 (at the same time as Atelier Lulua), that they are using a new engine and that development was at around 45%.

The 27th of May, the magazine Famitsu showed their online preview for the week, with Atelier Ryza on it. They revealed that the game is expected for PlayStation 4, Nintendo Switch and Steam and showed some images, including the logo of the game.[4]

The 28th of May, Atelier Ryza was officially announced[5] and the website was launched. During the month of June, it was revealed that the game would launch the 26th of September. The localization for the west was also announced for the 29th of October (North America)[6] and the 1st of November (Europe)[7].

A summer-themed costume for Ryza (Summer Adventure!) is available for free in the PS Store, Nintendo eShop and Steam for those players that bought the game during the first two weeks after launch.

Another costume for Ryza (Divertimento's Embrace) is also given as a free bonus for players that pre-ordered the game. A special event scene is also included with the costume.

Purchasers of the Digital Deluxe Edition also have access to various costumes, decorative elements for the atelier and other items.

A few weeks after the game was released in Japan, a season pass was announced. Its content is scheduled to be released between October and December 2019, and it will include tracks from previous Gust games, weapon skins, additional character stories, costumes and an additional high-difficulty area.[8][9][10]

Available physically only on PS4 and Switch, and digitally on all three platforms (PS Store, Nintendo eShop and Steam).

Only available digitally on the three platforms. It includes: 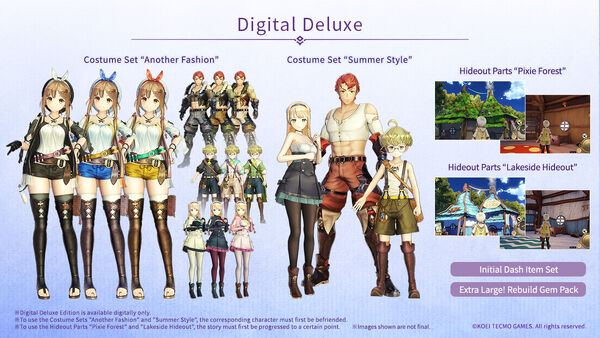 By 26th March 2020 hits, Atelier Ryza reaches 500,000 in shipments and digital sales worldwide, surpassing any other Atelier titles existed. They commemorated the celebration by an artwork by the game's character designer on the Gust's Twitter page.[17] 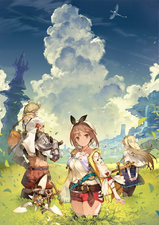