This is a direct sequel to Atelier Ryza: Ever Darkness & the Secret Hideout, set three years after. Continuing from the last game, the recurring theme of the game is Summer Memories[1] .

While it adapts the gameplay from the previous Ryza installment, the game features the titular character having new profound and extended abilities such as swimming, climbing, grappling hooks on trees, lightning, and riding monsters, as well as sliding and crawling through dungeons and areas.

The game is set 3 years after the events of Atelier Ryza. Ryza has continued to study alchemy on Kurken Island, and has become a teacher to the island's children. But she's begun to feel her alchemy skills have hit a limit. Events prompt her to travel to the capital city of Ashra-am Baird, where she not only reunites with her old friends Klaudia, Lent and Tao, but also encounters a mysterious fairy-like creature named Fi...

The game will introduce a new synthesis tool aside from the existing roster (Staff, Scythe, Axe, Fishing Rod, Bomb Rod, Hammer), the Emerald Band, which allows the player to search and explore dungeons with in contemporary ways.

The most prominent new action is the ability to profoundly interact with the water in the game. Synthesizing Air Drops also returns to the game, as Ryza will be able to get to explore water surfaces and go underwater to find various materials, or even discover new dungeons. The development team emphasized that the characters will now be able to have "wet appearances" art style.[2]

The "Linkage Synthesis" system from the previous installment has evolved with greater depth, enabling players to simply fill the Material Loops with the required ingredients to create everything from weapons and tools to medicine.

The newly introduced "Essence" feature now allows players to alter the elemental trait of an item during synthesis, and by altering the essence of a Material Loop the final item can take on brand-new qualities.[3] 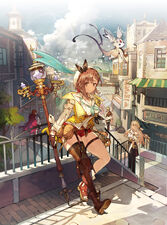 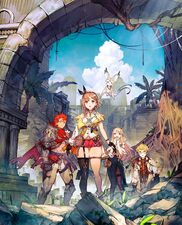