Atelier Shallie: Alchemists of the Dusk Sea (Japanese: シャリーのアトリエ ～黄昏の海の錬金術士～, Sharī no atorie ～tasogare no umi no renkinjutsu shi～) is the third and last game in the Dusk series of games.

Given the project code "A16", it is the sixteenth game in the main Atelier series and was initially released on the Playstation 3, the sixth and last Atelier game on the platform.

An enhanced port, Atelier Shallie Plus, was released for PlayStation Vita in 2016 in Japan and 2017 in North America and Europe. Another port of the game, called Atelier Shallie: Alchemists of the Dusk Sea DX, was released in Japan for the Playstation 4 and Nintendo Switch on December 25, 2019, and the US and European releases on January 14, 2020 alongside the global release of the Microsoft Windows version on the Steam storefront.

After a prologue where the protagonists and some gameplay elements are presented, the player has to select who will be their main character: Shallistera or Shallotte. This decision will alter the point of view of the game, but the development and the main objectives will be the same regardless of the player's choosing.

Atelier Shallie doesn't have a time limit. The story progresses with the tasks system. After completing the main tasks for each chapter, the player will enter a "free time" phase, which only ends when a certain amount of points are obtained (by completing optional tasks). After finishing the "free time" phase, the game will pass to the next chapter. In any of the phases, the player can advance at their own pace.

There also exists a "motivation" bar which goes from "bad" to "good" that fills when tasks are completed and that empties when exploring, synthesizing, gathering or fighting. A greater motivation increases the movement speed and the amount of items that can be gathered.

It works like the other games in the series.

Atelier Shallie Plus was released for the Vita in Japan in 2016 and the US in 2017. While the Japanese version had a physical release, the international versions were digital only.

In addition to bundling together the previous version's DLC, it enhances the story of Atelier Shallie by adding more story elements from previous games. The addition of Logy and Ayesha to the plot result in many scenes being revised and an additional subplot featuring Flameu's seed is added.[3] There are also many more scenes fleshing out the original storyline with the Shallies, such as the argument scene being expanded.[4] New costumes were added to the game, including some that were only unlockable as pre-order bonuses. In addition, the Premium version included new costumes for the Shallies based on Sophie and Plachta from Atelier Sophie.[5] The DLC dungeon is included, with the addition of challenging new superbosses.

A port of Atelier Shallie Plus for Nintendo Switch, PlayStation 4 and Microsoft Windows was announced at TGS 2019, under the title of Atelier Shallie DX as part of the Atelier Dusk Trilogy Deluxe pack similar to the Atelier Arland Trilogy Deluxe pack that was released a year before. This version was released in Japan for the Playstation 4 and Nintendo Switch on December 25, 2019, and the US and European releases on January 14, 2020 alongside the global release of the Microsoft Windows version on the Steam storefront. The DX version added a sprint feature to the overworld, a fast forward to the battle system, and included the pre-order and premium box costumes from the previous two versions in the base game. 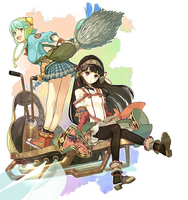 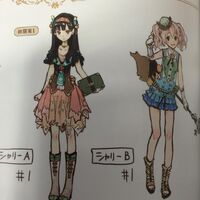