Atelier Totori: The Adventurer of Arland (トトリのアトリエ ～アーランドの錬金術士 2～ Totori no Atorie: Ārando no Renkinjutsushi 2) is the 12th game to be released in the official Atelier series. It is the second game in the Arland series, and the second to be released on the PlayStation 3. It is known by the project code "A12" .

Atelier Totori Plus is an enhanced version of the original game released on the PlayStation Vita. It was released in Japan on November 29th, 2012 and in the U.S. on March 19th, 2013.

Another port of the game called Atelier Totori DX was released September 20th, 2018 in Japan for the PlayStation 4 and Nintendo Switch and December 4th, 2018 in the rest of the world, with an additional Steam release worldwide.

The story of Atelier Totori takes place 8 years after Atelier Rorona: The Alchemist of Arland.

The game follows a young and aspiring alchemist, Totooria Helmold. She recieved her teachings from the great Rorolina Frixell, the protagonist of the previous game.

Her mother, Gisela Helmold is a famous adventurer who stopped coming home to visit 2 years ago. As Totori grows older, she wishes to find out more about her mother's whereabouts, and this becomes the game's main objective.

Totori asks her sister if she can become an adventurer. Her sister Cecilia Helmold ("Ceci" as she's more often called), immediately says no to Totori's request, fearing that Totori will go missing just like their mother. Totori is still determined, however, and speaks to her childhood friend Gino Knab, who also wants to become an adventurer.

They speak to the carriage driver Peter who tells them that they will need 100,000 cole to travel to Arland, the home of the Adventurer's Guild. Gino and Totori decide to slay monsters and collect materials around Alanya for a month in order to raise the money.

After a month, a discouraged Gino and Totori realize that they don't have nearly enough money to pay for the carriage trip to Arland. Seeing how serious Totori is about getting an adventurer's license, Ceci decides to give Totori permission to become an adventurer and gives her money for the trip. Now that she's been given permission, Totori and Gino travel to Arland.

When they arrive in Arland, Gino and Totori go to get their Adventurer's Licenses. At the guild, Totori and Gino walk into an argument happening between Cordelia and Mimi. When Cordelia realizes that Totori is an alchemist, she deems her valuable, and gives her and Gino their licenses immediately.

Ceci is worried sick by the time that Totori arrives back home to Alanya, but Totori tells Ceci the good news. Cordelia has told Totori that she will only have her license for three years before it will need to be renewed. If Totori fails to accumulate enough points on her license, then her license will be revoked. From this point on, the game's official introduction has ended, and the player will have three years to level up Totori's license.

After the third year, Totori will learn a bit about her mother's whereabouts from Cordelia who recognizes that Totori's last name is is also Helmold, just like Gisela. Cordelia gives Totori a piece of paper that Gisela had written on, which explains that she was going out to sea.

When Totori excitedly returns to her family to tell them that she may know where Gisela was going, they tragically explain that pieces of her boat were washed up on shore and she was assumed dead. Totori still refuses to believe that her mother is dead, and asks her father Guid to build her a ship. Ceci is outraged, and ignores both her father and Totori, refusing to go along with their plan. Until Ceci gives Guid and Totori permission to build the ship, the player will not be allowed to leave Alanya until Ceci agrees to go along with the plan.

Totori must gather supplies and deliver the ship parts in order for her father to build the ship. Once all of the pieces are delivered, Guid builds Totori a ship, and she is sent on her way out to sea. By heading east, Totori runs into the Flauschtraut, a giant monsterous fish that was believed to destroy Gisela's ship. Upon seeing the scar on the Flauschtraut's face, Totori believes that Gisela herself inflicted the wound and gains confidence to defeat it.

After the Flauschtraut is defeated, Totori heads to Frontier Village, the area that her mother was last heard from. Upon her arrival, the village elder Pilca is shocked that Totori has arrived. She tells Totori of the events that followed after Gisela visited Frontier Village, and Totori finds a gravestone put up by the villagers for Gisela. She returns to Alanya village to deliver the news to Ceci and Guid.

The game ends when Totori goes to get her permanent license in the 7th year. Depending on the player's actions throughout the game, they will receive different endings. The 'True Ending' of the game depicts Totori's mother coming home.

Every time Totori ranks up her license, she will be given a new set of tasks that will enable her to rank up her license further. The player will need to do a variety of adventuring and synthesizing in order to achieve the appropriate rank.

The North American version of Atelier Totori was released with the ages of several characters changed, which causes a change in the time between Atelier Rorona and it's sequel Atelier Totori: The Adventurer of Arland, and also changes the age of several characters in between the two versions. Their decision was eventually called a retcon , and is not considered to be an official change to the series. However, Atelier Meruru maintains the original ages of all characters, new and old, as does Atelier Lulua.

For all intents and purposes, both ages will be listed for characters that appear in Atelier Rorona and in Atelier Totori. This is to avoid confusion for those players who are not aware of this issue.

The music was composed by Ken Nakagawa and Kazuki Yanagawa. The soundtrack consist of 2 CDs and comes with 62 Tracks. It released on the 23rd June, 2010 and was published by TEAM Entertainment. The Opening song Pilgrimage was performed by Mineko Yamamoto while the Ending song Dia was sung by mao.

A total of 9 downloadable elements (DLC) were released for the original PlayStation 3 version of the game. Further releases of the game (Atelier Totori Plus and Atelier Totori DX) included all the DLC.

Atelier Totori Plus: The Adventurer of Arland (トトリのアトリエ Plus ~アーランドの錬金術士2~ ) is an enhanced port of Atelier Totori for the PlayStation Vita featuring additional costumes, illustrations, dungeons and alchemy recipes. It also contains the DLC from the PS3 version. New costumes include a nurse outfit and a swimsuit, both of which are for Totori. The new dungeon, Orthogalaxen from Atelier Rorona, serves as a post game challenge.

A limited edition of the game, called Atelier Totori Plus: The Alchemist of Arland 2 Premium Box (トトリのアトリエ Plus ~アーランドの錬金術士2~ プレミアムボックス) was released for Japan and Asian regions. It contains the game, a "mini crystal paperweight", and an Atelier Totori Plus custom skin shell for the PlayStation Vita.

The DX version was almost unchanged from Plus. However, it added a costume that was previously unobtainable without a pre-order code, the ability to dash on the field maps, and a fast-forward function for battles. 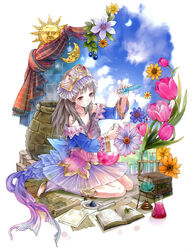 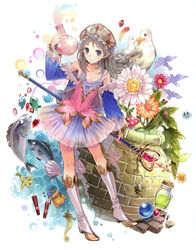 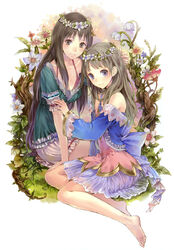 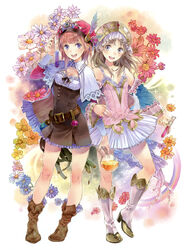 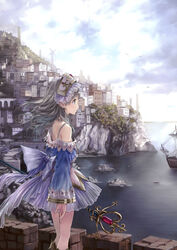 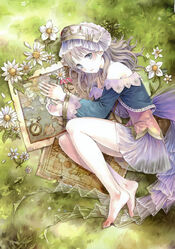 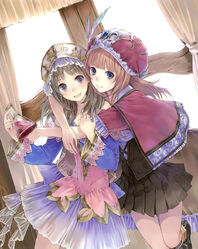 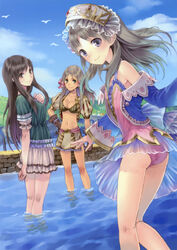