Cordelia "Cory" von Feuerbach is a supporting character in both Atelier Rorona: The Alchemist of Arland and Atelier Totori: The Adventurer of Arland.

Cordelia grew up in Arland with her childhood friend Rorona. Cordelia is a responsible yet stern person who has difficulties showing her feelings towards others. She gets easily embarrassed when Rorona calls Cordelia by her childhood nickname 'Cory,' especially if it's done in front of other people.

She comes from a noble family, although her noble status was purchased. Like most people of Arland, she believes that the system of nobility is outdated. She's aware of her stature and how people may treat her with her status, but she doesn't take much pride in the fact. She loves jewelry and gems, and will secretly have Rorona bring them through the guild in Atelier Rorona.

Cordelia's weakness is her short stature. She's self conscious about her height, and instantly grows angry when it's mentioned. She hates Astrid for creating Hom only a few inches taller than her. She doesn't grow a single inch in 6 years' time when she makes her appearance in Atelier Totori. When Cordelia sees Chim for the first time, she praises Rorona for making Chim shorter then her, and is ecstatic that she's not the shortest person she knows.

She also appears in Atelier Questboard and was shown in the first footage revealed of the Atelier Rorona game announced for the 3DS.

Cordelia is a playable character, and will be your first party member. She can be found in the Town Square next to the fountain if you want to recruit her to your party, and she costs no money to hire. She fights using bullets and can also hit enemies with her fists.

Cordelia has her own special ending that can be achieved by viewing specific in game events, fulfilling requests and by improving your relationship with Cordelia.

6 years after the events of Atelier Rorona, Cordelia is still living in Arland, but has now been employed as a receptionist for the Adventurer's Guild. She is introduced when Totori makes her first visit to the Adventurer's Guild. She can be seen arguing with Mimi when she refuses to give Mimi an Adventurer's license. Upon learning who Totori is, she immediately gives her a license, telling Totori that it will expire in 3 years time. She hasn't grown an inch, and is still hypersensitive about her height.

Any time the player needs to rank up their license, they must go speak to Cordelia at the Adventurer's Guild in Arland. She will add points to your license and determine if Totori's license is good enough to rank up. After the third year, Cordelia also gives Totori valuable information on her mother Gisela.

Cordelia is only available as a party member through purchasing DLC. If you have her available, talk to her behind the desk at the guild to recruit her. She will use bullets like she did in Atelier Rorona.

While she does not make a physical appearance in Atelier Lulua, she has become the Chancellor of the Arland Republic.

Cordelia joins during the prologue, at level 1. Her initial equipment are a Normal Bullet and Cloth Skirt. 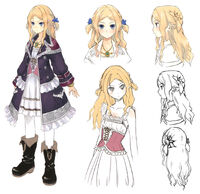