Drossel is a playwright who was taught the art of combat by her father, Fritz Weissberg. She has absolutely no sense of direction and doesn't sweat the details, but she sometimes shows an insightful side and goes along with anything as long as it's fun.

Like her father, she has a great passion for dolls. Most notably she is very fond of a doll called "Fritz-kun", which looks like her father in appearance. It's an important childhood memory to her as it starred in a puppet show performed by her father and mother, who left the family because of Fritz and Drossel's obsession with dolls.

She hopes to one day perform the best puppet show there has ever been together with her father to show to her mother. 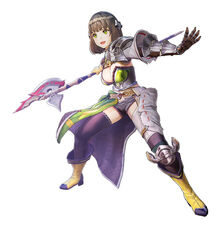 Puppet Show in Melveille
Add a photo to this gallery
Retrieved from "https://atelier.fandom.com/wiki/Drossel_Weissberg?oldid=36911"
Community content is available under CC-BY-SA unless otherwise noted.