Our community needs more information on this page! Can you help out? Click here to add more.
"Rorona: The name of my beloved mother[1]."
— Elmerulia Frixell

She grew up in the Armster Orphanage along Eva, and she values both the other orphans and her adoptive mother as her precious family. She loves curry, similar to her mother's passion for pie baking.

She wants to become a great alchemist like her mother, and studies under Piana. Lulua's growth as an alchemist takes a big turn when she finds a mysterious tome only she can read - the Alchemy Riddle. This leads her fate to become intertwined with the mysterious Stia.

Even if her mother is often away because of work, the two have a good relationship. However, due to her mother's negligence of her second workshop in Arklys, Lulua is forced into taking ownership and reopen it as "Atelier Lulua".

Lulua believes that things will always work out in the end. She's willing to go to extreme ends to protect the things important to her, even if it means accomplishing what's supposed to be impossible. Even if Lulua has a bright outlook on life, she still feels a great pressure not to harm her mother's reputation with careless actions.

Lulua is the player character and protagonist of the game's narrative. Although she is the daughter of a famous alchemist, Lulua's skills still have a long way to go. Things change when she starts to decipher the Alchemyriddle, which strangely seems to always provide her with the right hints and information. As Lulua's life as an alchemist goes on, she'll eventually have to face the truth of the Riddle and the mysterious ruins of her hometown.

Like previous protagonists, Lulua gathers materials, synthesizes, fulfills quests and makes friends and allies along the way. The Alchemyriddle guides the player and Lulua's actions, and she'll be faced with an important choice that decides if the game ends early in a Bad Ending, or if the story carries on to the final chapter.

Lulua is a member of the party. She uses a staff as a weapon 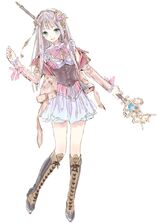 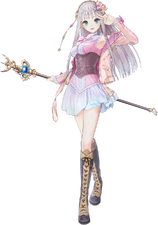 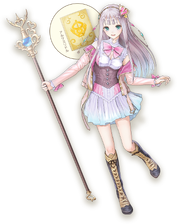