Empel is a wandering alchemist investigating the ruins of the Klint Kingdom together with Lila Decyrus. Due to an injury, he is unable to perform advanced techniques but teaches Ryza the world of Alchemy as she has the talent. He apparently has a sweet tooth that enjoys all kinds of sweets, of which he would often buy dozens of them.

In the DLC Episode: End of an Adventure and Beyond, Empel is one of the main characters involved in the story.

Before the events of the game, Empel was once an alchemist for the kingdom of Roteswasser, but joined a conspiracy to defy its royal family. The scheme failed after their conspiracy leader, a fellow alchemist, synthesized a powerful explosive, resulting a major injury to his arm preventing him from performing sophisticated alchemy. Since then, he was banished from the kingdom. He found a new purpose after meeting Lila and learning what the Klint Kingdom had done to her people, promising that he would battle against the sins of all alchemist until the day he died. The two travel together working to undo what the kingdom had done to the Underworld and closing the portals that were opened to it.

At the start of the game, he encounters Ryza Stout on Kurken Island while investigating ruins. He starts her on the path to alchemy along the way and as Ryza improves, she joins and helps Empel on the mystery behind the ruins and the main goal in defeating the Philuscha and restoring the Underworld. However, Empel mostly just give advises and uses basic alchemy as he lacks the strength due to his arm injury and must be protected by Lila at all times.

In one occasions when the player interacts with Empel, they will reveal how he first met Lila; long time ago he was exploring some ruins when he coincidentally found Lila all bloodied and injured, at which she leaped at him as Lila just wandered through the human world from a gate. Shortly after, Empel sealed the gate and both had decided to travel together, undoing the Klint Kingdom's awful legacy (though Lila stated it took them two weeks researching the Underworld and the gate), but as they continue to talk to one another it resulted to an angry bicker, of which the rest commented that is how they work well together.

With Ryza proving that she is a good alchemist and can level with Empel's desire to overwrite what the Klint Kingdom's full of mess left behind, Lila showed her a memo of an instruction that can finally make Empel abled and use his arm, though she lacks the materials and believes Ryza can find them. Ryza took advantage of the Gathering Synthesis and using the Resonance Orb that can only be found on the said ancient tool. With Ryza having all the complete materials, she synthesized the Prosthetic Arm, and tries to give it to Empel.

Empel, seeing the tool, instantly recognizes she got the materials from Klint Kingdom's and refused to use it. Lila tells Ryza about Empel's history of how he got his arm broken, and reminded of his promise when both had first met. Lila wanted to continue that oath by using the tool, of which is created not by the ones he meant to destroy, but by alchemist of a good heart: Ryza. Empel finally accepts the prosthetic arm and gleefully thanks Ryza that he can now once again perform alchemy. Empel can now join the party as a playable character.

Empel is the last character to be unlocked in the game, and requires to synthesize a tool named Prostetic Arm, but can only be made exclusively with a material that can only be found on the Gathering Synthetizer called Resonance Orb. This will allow him to use his arm extensively, thus unlocking him to finally move freely. Empel has higher stats on Speed but not much on other atributes, but can carry four items which is the highest amount and the only character to do so, which meant Empel is more relied as an item attacker, using battle items at will. His active skills are magic-based, and the higher the party's tactic level is, the more likely he can reduce the enemies' stats. 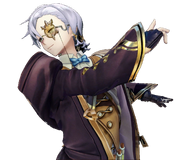 Empel and others spying on Ryza

Empel with the complete party