Firis is a girl from Ertona, a closed off mining town. Longing to travel the outside world, she learns alchemy from the visiting Sophie Neuenmuller. She has a special ability that allows her to tell where ore is buried.

Firis is the main protagonist and player character of Atelier Firis. She initially works as a miner and because of her special ability she has never had to use a pickaxe to find ore.

She realizes that with the capabilities of alchemy even she, who has no physical combat ability to defend herself from monsters with, can survive in the outside world. Her parents then allows her to leave the village with one condition - before she is allowed to truly freely travel the outside world she must first travel to Reisenberg and pass the alchemist exam within one year. She is supported by her sister Liane Mistlud during this journey.

After the exam, Firis briefly works as an alchemist in her hometown but soon develops a wish to return to travelling. Firis can then set out into the world without a deadline and by the players actions, find different paths to take in life (endings).

Firis also has several different costumes available throughout the game. The costumes each have an effect on the gameplay attached to them, such as improving harvest results or movement speed. In New Game+ mode, all effects will be active at the same time no matter what costume the player picks for Firis.

Over the past 4 years, she traveled to all kinds of different places and loves traveling more than anyone. She has grown much taller and looks more like an adult. Her friendly personality makes her easy to get along with, but those around her tend to view her as too childish for her age. Her skills as an alchemist have also grown formidable, and she is currently operating an atelier in Merveille. Firis learned how to use a bow from her older sister Liane, and trains as a hunter. She uses arrows made with alchemy to improve her accuracy.

Firis can only equip staff-type weapons and cannot wield a secondary weapon.

She can equip light armors.

She can use the widest range of items out of all the playable characters, with the exception of a few items locked to Sophie.

In Lydie & Suelle she fights with a bow and can use any item not locked to Lydie, Suelle or Sophie. She joins at level 15, before the party enters the Luminous Ice Cavern.

Her unique item is the Bursting Gift, which is unlocked from a recipe received by Liane after her last friendship event.

This costume saves LP in desert-type maps and makes the effect of Air Drops last longer. It's obtained from an event in Flussheim. Liane buys this for Firis from Mea's shop.

Saves LP in snow-type maps. It's obtained from a quest in Flocke.

Will add additional lines to the grid when synthesizing. This dress was made by Firis' mother for the exam. It's obtained from an event in the Atelier Tent.

This costume reduces the price of buying items at shops and increases the value of items when selling. It can be bought from Nanna's shop in Reisenberg and costs 20 000 Cole. It was made by an award-winning tailor and Firis hopes that it will make her look more grown up.

This costume makes Firis move faster. It's obtained from Aurelie, who wore this in the past back when she was young and took on the alchemist exam.

One of the costumes available only as DLC. It increases the chance of finding better materials. In Japan, a code for this costume came bundled with the first print edition of the game.

A bikini costume that is available as DLC.

A DLC costume which Collaboration of Gust Festival from 31 August 2017 - 31 August 2018 by Purchase Blue Reflection Game. This costume are exclusive available in Japan, Unless in DX Version which Available Overseas.

A DLC Costume which Collaboration of Gust Festival from 31 August 2017 - 31 August 2018 by Purchase Nights of Azure 2 Game. This Costume Are Exclusive available in Japan, unless in DX Version which Available Overseas 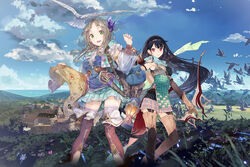 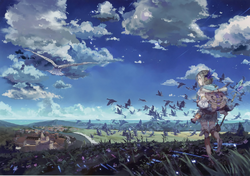 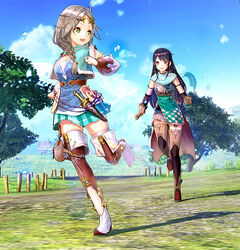 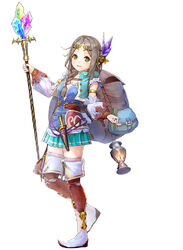 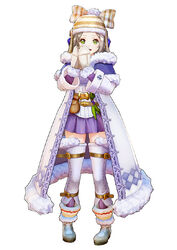 Firis, Sophie, Plachta, and Liane traveling to Adalet in the True Ending.
Community content is available under CC-BY-SA unless otherwise noted.
Advertisement