Gray is a supporting character in Atelier Iris 2: The Azoth of Destiny.

Despite his intimidating looks as a dragon man, Gray is a sweet and friendly individual and is considered to be the party's "big brother" due to his caring personality, but can lose his temper when the people he cares for are in danger. Gray enjoys meeting strong people to fight and be friends with and dislikes boredom.

Though he wants to kill Dragon King Ardgevald in hopes of removing the dragon man curse from him, Gray's biggest dream is to become the strongest warrior in history.

Years before the events of Atelier Iris 2, Gray was once fully human and had trained with Galahad as an imperial soldier, but they both abandoned their master. His appearance as a dragon man comes from the fact that he's slain so many dragons in his life (thus earning him the title of "Dragon Slayer") that it caused the Dragon King Ardgevald to curse him with their shape. Despite this, he isn't bothered by his new form and actually enjoys the incredible new power that comes from being a dragon.

In the game he first meets Felt in the Tatalian desert after rescuing him from a sand monster, who originally mistook him for a Fire Mana. He tags along with Felt just because he wanted to find a purpose in life, instead of just wandering around aimlessly (he really dislikes being bored). At the end of the game, Gray is seen training young Simsiltians in swordplay. Even after defeating Ardgevald, the curse incidentally was never lifted.

In battle, he fights with a pair of shield/gauntlet type weapons. As expected of him, Gray has high scores in LIFE, ATK, DEF, and Dark DEF, but he's the slowest of the playable cast and the other characters can take more turns in the time it takes for him to get one turn of his own. He also has low MAG, but this can be corrected with accessories and boosting items. Despite his lower speed, he doesn't need to hit the enemies very often to defeat them. It's quite common for Felt and the others to soften up the enemies and Gray finishes them off, which makes him gain the experience bonus at the end of the battle and level up more often. Gray possesses special moves that inflict a lot of damage to enemies of Dark classification as well as dragon breath skills that attack with Fire, Ice and Thunder. Gray best serves the party in the front position where he can absorb enemy attacks easily; he can even ensure that enemies aim only for him with his Taunt ability. 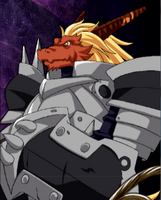 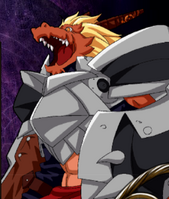 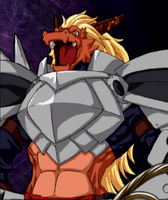 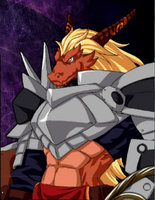