Fumihiko Tachiki (Japanese)
Kirk Thornton (English)
Hagel Boldness (ハゲル・ボールドネス, Haggel Baldness) is a recurring character in the Atelier Series, often operating a weapons shop, and always sensitive about his bald head. Always portrayed as an extremely brash but cheerful man, a recurring theme is people saying his name wrong and inadvertently calling attention to his baldness. This extends to occasional quests and subplots of Hagel trying to grow his hair back or having the alchemists craft him a wig. He's also prone to breaking out into singing when in a good mood, despite possessing a terrible singing voice.

Hagel runs a weapons shop in each game, occasionally posing quests for the alchemists to fulfill for him.

In Mana Khemia, Hagel runs the Student Store alongside Leyfa. Unlike in later games, he does not craft weapons, but his shop does sell mostly ore- and metal-type items, such as Canone Rock or Black Steel.

Hagel owns the Beefy Weapon Shop in Arland, where he works as blacksmith making weapons, but likely also taking jobs making tools. In Atelier Rorona, he agrees to help Rorona by constructing custom made weapons for her and her party members, serving similar roles in Atelier Totori and Atelier Meruru.

While he does not appear in Atelier Lulua, he is referenced in the name of the smithy, "Hagel & Cole." Cole mentions Hagel as his teacher and keeps a bust of him on a shelf within the shop.

In Atelier Totori, Hagel shares his voice actor with Gerhard, which leads to a pair of cutscenes related to Hagel learning about a bartender in Alanya that resembles him and eventually travelling to Alanya to meet him in person.

While Hagel only appears in person in Atelier Lydie & Suelle, large gold statues of him appear throughout the maps in Atelier Firis as obstacles. Hagel is the blacksmith in Merveille (replacing Logy from the previous two Mysterious trilogy titles) and reveals that he made the gold statues that appeared throughout Firis as a promotion for his shop.

In Atelier Marie and Atelier Elie, there is a weaponsmith very similar to Hagel known as Bukiya no Oyaji. In a interview with Gust's development team, it was stated that they are not the same character despite their similarities. However, Bukiya no Oyaji was included in the book "Atelier Series Official Chronicle" in the "Hagel Collection". 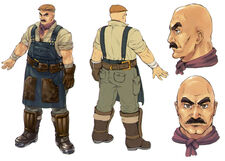 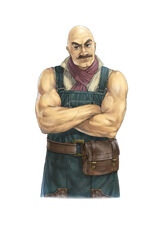