Hallesch is an adventurer available for hire. He is a well mannered and friendly person with a strong respect for the law. He once aspired to be a knight, but felt that he wasn't strong enough to fill the position. While training to become stronger, Hallesch became an adventurer, and now continues to train. He does not necessarily plan on returning to his dreams of knighthood, but still wants to help others.

His weapon of choice is a lance. Marie can hire Hallesch as one of the adventurers to accompany her to places outside of town. He is a high strength character capable of dealing a lot of physical damage to enemies. He is however slow, and weak to magic. He is also expensive to hire.

Hallesch's only request in the game is for a dragon fang that Marie can get after defeating the Flampfile at Mt. Viland. He will pay Marie an absurd amount of cash for it, and Hallesch will give the fang to a young boy to fulfill his promise to him.

Hallesch has fallen in love with Flea Schenk. With the help of Elie, Flea will be able to flee from Salburg with Hallesch. Her father Dio Schenk doesn't approve of their relationship, and so Flea was forced to sneak away in secret.

Hallesch is one of the hireable adventurers available in both Atelier Marie GB and Atelier Elie GB. He is available to hire early on and is relatively cheap, considering his abilities in battle.[2] He is still slow in battle.

When the party goes to Grakenbruk, they can meet Flea running her own bar. After seeing her, Hallesch will become available for hire. 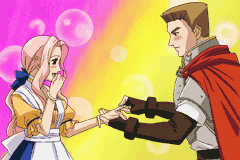 Taking Hallesch back to Salburg will trigger an event between him and Dio, where Hallesch asks Dio's permission to marry his daughter. Dio disapproves and is still angry that Flea ran away.

After some time, Hallesch asks for an 'Eternal Ring' to propose to Flea. When the ring is made, Dio will ask if Marie/Ellie/Anis could secretly swap the Eternal Ring with Flea's mother's ring.

Take Hallesch to Grakenbruk, and the two will happily get married.