Chairman of the Merchant Association & Collector

Harry is a wealthy man who holds many notable titles, such as being the owner of Black Cat's Path and the organizer of the Treasure Trove Contest. He holds a great interest for history and relics, and also writes books. He loves things that other people, such as Marietta Muir, would consider to be "junk".

After the events of Atelier Ayesha: The Alchemist of Dusk, he left his company in the care of a reliable successor, and left Vierzeberg for a scientific research trip.

During Atelier Escha & Logy: Alchemists of the Dusk Sky, he has become an adventurer and is travelling together with Reyfer Luckberry. He continues to travel with Reyfer in Atelier Shallie.

Harry is a wealthy man in Vierzeberg, with many notable titles, such as being the owner of Black Cat's Path. He lends Ayesha a place to stay and to use as a workshop in Vierzeberg, and also tells Ayesha about the Glass Factory and Zweiteturm.

He is also the organizer of the Treasure Trove Contest, and participates as both a judge and contestant.

Harry is an eccentric man calling himself an adventurer who travels together with Reyfer Luckberry. He frequently appears in various places, but can also usually be found in Colseit.

He has left his company in the care of a reliable successor, and left for a scientific research trip. He is still an amateur explorer, and often runs into trouble during his adventures. He continues to adventure to write a new book[2].

He later reveals to Escha and Logy that he left his company to a successor, embarrassed at consistently being beaten in his rare item contest by an amateur herbalist. He vows that he will one day become the greatest collector of rare items and beat her again.

Harry continues to travel with Reyfer in search of treasure. His travels have found him near the Dusk Sea and is currently exploring the area. He is trying to open up a trade route between Stellard and Vierzeberg.

Harry at the Treasure Trove Contest in Atelier Ayesha 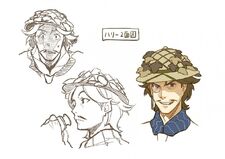 Retrieved from "https://atelier.fandom.com/wiki/Harry_Olson?oldid=36244"
Community content is available under CC-BY-SA unless otherwise noted.