Iksel Jahnn appears in Atelier Rorona and Atelier Totori as the owner of the Sunrise Cafe.

A hot-blooded chef, Iksel is very devoted to his work at the cafe. He begins traveling with Rorona to be able to gather his own ingredients for cooking in Atelier Rorona. One of the only foods that he hates is mushrooms.

Though he is usually polite, Iksel has a tendency to be sarcastic and is incredibly competitive. He is known to initiate cooking contests to prove his cooking skill against alchemy users.

Iksel serves as a valuable source of synthesis materials through his cafe, and he is also able to teach Totori new recipes through his cooking lessons sub-quest in Atelier Totori.

Iksel is a playable character Atelier Rorona. He is one of the earliest characters available in the game, becoming available during the first month. Bringing Iksel to new areas in the game often triggers a scene in which he will discover a food item in that area. Finding these items, other than being useful in synthesis, are also required to get his specific character ending.

Iksel will join the party if a DLC is installed or if playing the Plus version. He joins at level 30 and can be recruited at the Sunrise Cafe.

Iksel joins during the first assignment, at level 2. He comes equipped with a Normal Pan and Normal Threads.

Iksel has access to both offensive skills and healing skills. 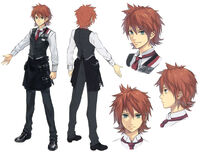