Ilmeria is an alchemist who isn't shy about calling herself a genius. She has a friendly rivalry with Firis. She has a childish personality and hates to lose, but she's also hardworking.

She comes from a family known for its talented alchemists, which has put a lot of pressure on her. She struggles with getting her efforts recognized by her parents, who are both skilled alchemists.

Ilmeria later grows into a skilled alchemist and becomes the teacher of Lydie and Suelle Malen.

Ilmeria is an alchemist who, like Firis, is heading to the exam in Reisenberg. Despite her high alchemy skill, she is not yet a licensed alchemist. Firis meets her early in the journey and she plays a more prominent role in the narrative than most of the playable characters.

Depending on the player's test score, she can be fought during the alchemy exam.

Through her friendship with Firis she finds her own way in life, separate from the opinions and judgement of her parents and other people. Ilmeria comes to the conclusion that she wants to open an atelier in Flussheim. In her ending, she opens the atelier together with Firis.

Ilmeria is an alchemist who was somewhat forced to become Lydie and Suelle's trusted teacher. She was personally invited by the kingdom to come to Merveille, where she is now planning to set up an atelier. Because she is on official business, she is only allowed to use her alchemy staff and uses it exclusively in battle.

Her skills are on par with Firis, and they used to run an atelier together. She easily convinces her friend to help her two students.[1] She is available as a DLC character.

Ilmeria receives a letter from her parents. Her father compliments a staff that she sent and says that both he and her mother are proud of her. She says he can relate to the pride he feels when she looks at the twins. The girls promise to keep working hard. (Event unlocks at Alchemy Level 35.)

Ilmeria Von Leinweber was born into one of the Three Great Houses of Alchemy, which promised a childhood of rigorous training under a father who wished to see his legacy carried forward by his daughter. By her account, his tutelage was strict and particular yet effective.

Ilmeria first makes an appearance in the game Atelier Firis: The Alchemist and the Mysterious Journey, where she's heading to Reisenberg to take her alchemist's exam. Throughout the game, a friendly rivalry blooms between Firis and Ilmeria, during which players learn of Ilmeria's struggles with the weight of her family's expectations.

"I'm the greatest alchemy genius of our day!" This is how she first introduces herself in Atelier Firis, and it would seem she isn't just blowing hot air. In Flussheim, Ilmeria demonstrates her expertise in alchemy. Later still, in the exam in Reisenberg. This introduction also illustrates one of her most salient traits: her prideful nature. Through her interactions, Ilmeria ultimately paints herself with flattering colors. She's prideful, but she's earned it through hard work, and she ultimately cares about others. Players also come to learn that she has a secret affinity for cute things.

In her ending in Atelier Firis, Ilmeria forges her own path by opening an atelier in Flussheim. Having also forged a strong bond with Firis, she recruits her friend to join her in this endeavor. This ending is ultimately confirmed as canon in Ilmeria's next appearance, Atelier Lydie & Suelle: The Alchemists and the Mysterious Paintings.

In Atelier Lydie & Suelle, Ilmeria has been summoned by the royal family to take on an official role as alchemist. She's quickly swept up by the twins' to teach them in their quest to become alchemists. Throughout the course of the game, Ilmeria exhibits both an interest in their progress and a mind for their well-being. She goes out of her way to devise studies suitable to the unique needs of each twin, and steps in when she feels they need direct intervention. However, this never fully belies her strict nature.

In their events, the twins soon discover Ilmeria's predilection for cute things, and the cute manner she'll assume when her bearing is threatened. To Ilmeria's continual dismay, they take regular advantage of this knowledge, but she continues to teach and care for them.

As Atelier Lydie & Suelle progresses, players discover the breadth of the success Ilmeria has found in striking out on her own. She's earned her parents' respect on her own terms, pens a textbook on alchemy, and her having been personally summoned by the royal family of Adalet gives further credence to the rapport she's achieved.

Players also discover that the atelier Ilmeria opened with her good friend Firis didn't turn out well—that Firis' wanderlust was too much to resist. Firis was, "Like a tuna, unable to stay in one place." However, Ilmeria shows clemency and understanding when Firis shows up to apologize. Ilmeria only wishes to see Firis' puni-like smile, and wherever she goes, for Firis to return to her in the end. Later, Firis presents Ilmeria with a teleportation ring that will allow the two to visit one another no matter the distance that separates them. With this, Firis promises to always come back to Ilmeria, and Ilmeria wholeheartedly accepts the strength of her feelings.

As the game draws to a close, players witness Ilmeria's swelling pride in Lydie and Suelle. What's more, players get a glimpse of her uncertainty as a teacher, which stems from a genuine desire to see her students prosper. This culminates in a gesture of appreciation by the twins: a gift of heart-shaped philosopher's stones.

Many of her skills are of the fire element type and she can use many alchemy items.

She mainly uses staves, but can also use knives or guns as secondary weapons. 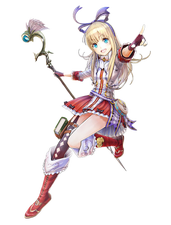