Judith Volltone is the protagonist of Atelier Judie: The Alchemist of Gramnad and a supporting character in Nelke & the Legendary Alchemists: Ateliers of the New World. She has also made an appearance in Atelier Questboard.

Judith is a young alchemist who specializes in making magical pills. Her parents owned their own magical pill shop, and left it for Judith after their death. Although she's an orphan, Judith has her pet, a parrot called Fink, as a companion and is never alone.

She is a bit of a tomboy by nature, likes round things and dislikes anything bothersome. Judith is also known as "The Hero of Troubled Times" due to her tendency to somehow always get herself and others into trouble.

Judith grows into a great alchemist during her time travel to year 885, a time where alchemy has died out in Findenn Kingdom. However, one day she mysteriously disappears without a trace, perhaps hinting that she returned to her own time. As of the sequel Atelier Viorate: The Alchemist of Gramnad 2, she has not been seen for 20 years.

Judith is the main character of the game and the character the player will control through the game.

A traveler requests that Judith make the item "Hourglass of the Dragon" which has the power to manipulate time. Just before she finishes the synthesis, a piece of Judith's hair falls into the cauldron which sends her 200 years into the future!

Judith's ultimate goal as an alchemist is to find her way back to her own original time. As she struggles to do so, she will make new friends and learn many lessons along the way.

Her parrot Fink is always accompanying her, wether it be in the workshop or out adventuring. Fink gives her advice, but also tends to complain or nag. They can communicate in human language, but Judith seems to fully understand their chirping as well. If the player's money is low (and enough time has passed), Judith will resort to selling Fink. However, the parrot always finds their way back to her.

Depending on the ending, Judith either stayes in the future where her friends build an Atelier for her, or goes back to her original time where she continues working in her old workshop. Rastel Biheusen plays a notable role in both of these endings. In the PSP-exclusive ending, Sphere returns to her duty of ruling time in order to protect Judith and the world she lives in. However, it's unknown what time period Judith decided to live in.

Judith can be equipped with a staff or a whip in battle. Judith can also use items and skills in battle. Unlike previous protagonists, her only non-battle stat is Popularity, which in turn can also be influenced by the other party members. However, her Negotiation skill affects the prices of items in shops. The Angel Spirit skill can reliably fight Ghost enemies, making sure that the player can always handle these no matter who their other party members are.

In order to get the new third ending in the PSP version, the player will have to tackle the depths of Faktoa Temple with only Judith and Sphere. As Sphere is very frail and limited as a character the player may have to rely mostly, if not entirely, on Judith for damage output. 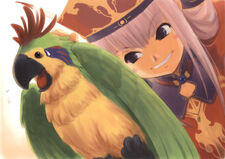 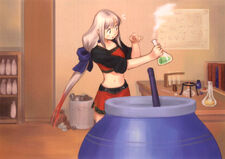 Judith without her hat and jacket