"It's only natural for a knight to help those in need."
— Julio Sebald Leidenschaft

Julio is a knight working for the church from the country of Adalett who came looking for the assistance of Sophie's grandmother. When finding out that she has passed away, he decides to take a bet on Sophie's potential as an alchemist and offers to help her until she can become a great alchemist.

Julio is a playable battle party member in Atelier Sophie. He is first introduced when saving Sophie, Monika, and Oskar from a powerful monster in Forgotten Nursery.

By proceeding through Julio's character events, Julio will eventually ask Sophie to make medicine for his friend, Nazarus. They end up saving Nazarus and discovering the Soul Space.

Julio is a non-playable character that only appears if Shanon's DLC is installed. He still works for the church and is Shanon's commanding officer.

In Atelier Lydie & Suelle, Mathias says that Julio would train him, and would punish him whenever he would do something incorrectly. Julio doesn't appear in the game.

Julio joins the party some days after the events in Forgotten Nursery. His starting level will be the same as the current party levels. He has high HP, attack and defense, but his speed is the worst of the party.

He can equip some healing items with him. The items he can equip are:

Julio is fought during Shanon's events in Atelier Firis. As part of her training, Julio challenges her. His stats for the normal difficulty are: 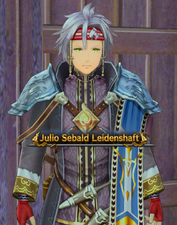