Juris Gruden is a playable character in Atelier Ayesha: The Alchemist of Dusk.

Juris travels with his younger sister Nanaca and their herd of cows. He is a talented huntsman who has been practicing the art of hunting for a long time. His senses have been honed by hunting, and he possesses great eyesight. He is very protective of his little sister, but is rarely seen. Even by his own family, Juris is barely noticed when he is approaching them, due to his quiet and solitary nature.

Although he seems unfriendly, Juris is a trusted companion and good friend. He takes time to form relationships with people, and doesn't like to stay around for small talk. After his business has been done, Juris has once again gone to the woods to continue hunting.

He likes to relax by having a drink, and often teases his friend Kyle Tarenbert for not being able to drink with him. He can be found in Hornheim after he is a recruitable party member.

Juris's ultimate goal is to hunt a mighty dragon and to then wear its scales. He tells Ayesha that many people in his family have slayed dragons in the past, and so he wishes to do the same.

For the first years of the game, Juris is only met in passing. He travels alongside his sister Nanaca and will sometimes be found with her during her events.

After the calves in Nanaca's herd become adult cows (after completing her events), Juris becomes available as a recruitable party member. For assisting Nanaca to cure her cow Poro of his stomach problems, Juris insists that he allow Ayesha to call upon his help as his thanks and payment. Juris can be recruited from Hornheim, where he normally spends most of his time drinking at the Tavern.

After he is available as a recruitable party member, he can be befriended and events can be unlocked in order to see his ending. He is also needed in an event if the player is going for Regina's ending. Juris will also open up his own shop at the monthly bazaar after he becomes recruitable.

Juris in an event with Ayesha and Regina.

Juris with Linca and Ayesha. 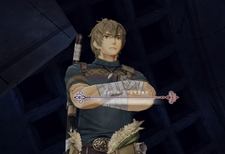