A mysterious and unfriendly gentleman, Keith is a wandering alchemist and a class 1 criminal wanted by Central. He travels alone, and runs into Ayesha many times throughout her journey, who refers to him as 'the spectacled man' when they first meet, and later 'Mr. Keith' after he tells her his name.

During the time that Atelier Escha & Logy takes place, he appears to be traveling with Ayesha Altugle and Odelia[1]. He is occasionally mentioned in the game, but does not appear in person.

During Atelier Shallie, he and Odelia run into Shallistera and Shallotte multiple times throughout their journey, only to finally join the group after gaining information from them on what could be causing the droughts.

He is an avid reader, and spends a lot of his time at the ancient library. His biggest pet peeve is when his reading is interrupted, such as when Ayesha wants to ask him questions.

He seems particularly interested in studying ruins, but his goal is figure out how to stop the dusk, though he doesn't speak to anybody about his true motives unless they have information that could be beneficial to him.

After seeing a ghostly image of Nio at the Herb Garden, he becomes interested in Ayesha, telling her that her sister may still be alive somewhere. He seems to know the connection between Nio's disappearance and the mysterious glowing flowers, but he never gives Ayesha a straight answer to her questions.

Keithgriff later admits that people practicing alchemy without knowing its true potential anger and repulse him. He is on the run because he destroyed all traces of alchemy where he once lived, after he realized that none of his fellow alchemists were willing to unravel alchemy's true potential. He warns Ayesha that he may have to take alchemy away from her too, even at the cost of her sister, if she cannot learn to fully understand alchemy.

Keithgriff plays a central role towards the end of the game, along with being a playable party member as well. His only goal is to find out the truth about what is happening in the world, and is only willing to help Shallistera and Shallotte if they have anything to offer that could also benefit him. He catches interest in memories that Wilbell saw when she made a contract with the Lord of Water, and forms a theory that when humans began wasting and polluting water cause they thought it was limitless, the Lord of Water hid it away to protect itself. He continues on to believe that the cause of the drought may be hidden somewhere underneath the earth and joins the party and investigations in return for the information.

He is travelling together with Odelia during this time, and he has begun to smoke a pipe with medical effects instead of cigarettes. In the end of the game, he sets out travelling again with Odelia, and Ayesha and Nio who are seen joining in later on.

Keithgriff fights using a special alchemic ring as a weapon in battle along with various crystal orbs filled with energy of a different element. During the events of Shallie, he is shown to have acquired a gauntlet similar to Logy's Blitz Core gauntlet, which requires a special gemstone used for rituals in order to activate it.

Though Keithgriff is one of the more powerful ally in both games, he is a difficult one to use due to his high MP cost, particularly when using his "Douple UP" skill. One way to overcome this is to have his equipment imbued with the Property, "Skill Enhance LV3" (Ayesha) or "Expert Technique" (Shallie) to significantly reduce the MP Cost while boosting the damage of his skills.

Keithgriff is fought in Hallos Village in Atelier Ayesha. 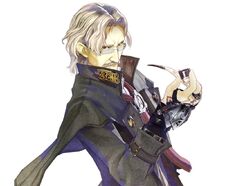 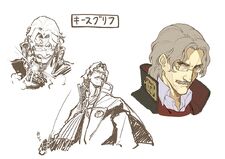 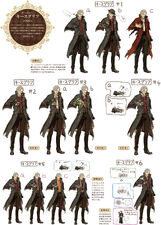