Klaudia is the daughter of wealthy travelling merchant. She possesses a refined aura and kind personality. She has an interest in music and practices playing the flute, but hides it from her father.

She lacks friends due to having to constantly travel because of her father's work. When visiting Kurken Island she makes friends with Ryza, Lent and Tao, and becomes one of the members of the secret hideout. Together they share many adventures over the summer.

Klaudia can be played as the center character of the DLC Episode: Atelier Klaudia.

Because of her mother having a weak body, she often needs to be treated. One time her mother needs to see medical attention in another town, Klaudia went with her and on that point she is taught the basics on how to play the flute. She comments she had fun doing it with her mother even though she wasn't good at it. Then after few years, her father came to see them. Klaudia had even put on a recital just for her parents to see and hear it. Time passed and she decided to go on travels with her father, leaving her mother's side. Initially, Klaudia practiced playing flute without hiding it, however, but whenever her father watches her play, she would see his sad expression, remembering the times that they were all together but because of the present circumstances they now couldn't. Once Klaudia realizes this, she couldn't bear to play in front of his father anymore, hence why she always had to find a secret spot to do it.

Klaudia appears to Ryza in the mainland after saving her from a monster and eventually romancing her throughout the game. Her arc deals mainly about her instrument, flute, taught and given to her by her mother, and try to play it for everyone who wants to hear it. Initially she is often afraid for others to find this out (especially his Father) so she plays somewhere far, but eventually as the story progresses she is able to develop courage to play it. In some cases her arc also revolves friendship, as someone who as to travel with his father she is not able to do those kind of stuff, so Ryza and her friends help her out and get the best memories while on stay in the island.

The real reason why Klaudia is so hesitant to tell his father about her playing the flute is because of her mother's involvement from it, as explained in the past. Being able to play the flute while they were in the Underworld gave her further courage that her music can bring comfort to others, and promises to one day play it once more for her father and finally get rid of his sadness.

Before the final battle with the Ravaging Queen in the underworld, Klaudia took the effort to have courage and confronted his father about her flute practices outside the caravan. Klaudia then played the instrument for her father. Initially, Lubart thought that she was playing the flute because she wanted to return to her mother but realized, through the music, Klaudia truly wanted to travel with is father and loved all their ventures.

In the middle of Chapter 3, Klaudia will join the party. Her stats priority is Speed. Mostly supposedly use as a Support, her effects and traits on her weapon allows her to heal more but has fair amount of damage if used normally. Klaudia can carry two items. Her attribute is Ice.

Klaudia's active skills allows her to heal her teammates efficiently and the passive ones can increase the chance on getting more AP, as well as getting ailment resistance and increased evasion. 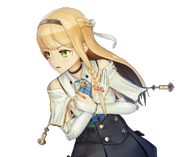 Klaudia with all stars

Klaudia preparing for the day

Klaudia with her friends at the beach