Queen of the Demon World

Kyrielich "Kyrie" Fagnah is a supporting character in Atelier Marie: The Alchemist of Salburg and Atelier Marie, Elie & Anis: Message on the Gentle Breeze.

A mysterious knight who is graceful with a rapier. Many of Marie's messages are told by Kyrie. However, Kyrie's importance is not really described in the game. She returns in the spin-off game Atelier Marie, Elie & Anis, and plays a bigger role in the Atelier Marie & Elie: Zarlburg Alchemist manga.

Kyrielich is actually half demon. Due to this she lacks the usual characteristical horns, but can use magic as demons can by nature. [1] Her mother was a human who got lost in the demon world. As she was not the legal wife of King Fahren, Kyrie is neither a legitimate princess. She got along well with her mother, but the treatment her half-brothers gave her led to her escape to the human world. [2]

Marie can be introduced to Kyrie as early as Fall of the first year. She is a mysterious swordswoman who often tells Marie to not associate with her for her own good. Despite this, she is still an adventurer that the player can hire, and she seems to want Marie to help her with something.

Kyrie confesses that she is actually half demon if she is in the party when Marie defeats the demon in Airfolk Tower. She will then visit Marie's workshop in the fifth year and explain the situation if her friendship is 75 or higher. Her goal was to defeat her father, the ruler of Airfolk Tower. She explains that she was unable to bear that she was related to the demon, and therefore escaped to the human world. However, during her visit she came to believe that humans are even worse than demons, with the exception of one person - Marie. After saying her goodbyes, Kyrie leaves the game permanently and can no longer be hired. 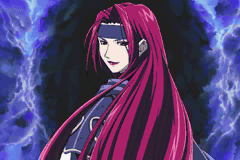 With an item called 'Temptation of the Darkness', reaching the top floor of Airfolk Tower will make Kyrie and the Demon World accessible. She is now queen of the Demon World and can be encountered by both Marie and Elie. The item which brought Marie/Elie to the Demon World normally should not have enough power to do so, leading her to believe that the rift between the worlds is widening. She then decides to once again go to the human world in order to find out the cause, and becomes a hireable adventurer.

Kyrie's events are focused on her past and her existence, most of the events occuring in the Church in Salburg. After a number of events, Kyrie will again leave the party completely and her status screen will change.

Kyrie also explains how the magic system of the world works, and points out that the two worlds may one day be completely separated due to human activity and development eroding magic in nature.

If the player sides with the demons through the questline for the Forbidden Knowledge ending it will be impossible to see the end of her storyline. However, Kyrie will not leave the party that way.