As a member of the fallen Oren race in the Underworld, she strives a goal to eliminate the remaining problems left by the extinct Klint Kingdom, and avenge her homeland from the Philscuha's invasion together with Empel Vollmer.

In the DLC Episode: End of an Adventure and Beyond, Lila is the center character and can be played as the character in the story.

Lila is one of the few remaining members of the Whitefang clan of the Oren race. Her age is unknown, but she saw the devastation caused by the Klint Kingdom firsthand.

She travels with Empel to various ruins of the Klint Kingdom in search of gate portals to seal, and by the time for the game, they arrived at Kurken Island where most said ruins are found. During the two's journey and first half of the game, Lila serves as Empel's bodyguard, as he cannot use his arm in full strength until he was synthesized with prosthetics.

In one occasions when the player interacts with either Lila or Empel, both will reveal how they first met; long time ago Empel was exploring some ruins when he coincidentally found Lila all bloodied and injured, at which she leaped at him as Lila just wandered through the human world from a gate. Shortly after, Lila sealed the gate and both had decided to travel together, undoing the Klint Kingdom's awful legacy (though Lila stated it took them two weeks researching the Underworld and the gate), but as they continue to talk to one another it resulted to an angry bicker, of which the rest commented that this proves that they work well together.

With Ryza demonstrated that all she's done is to be a better alchemist and can level with Empel's desire to overwrite what the Klint Kingdom's full of mess left behind, Lila showed her a memo of an instruction that can finally make Empel's broken arm to be used perfectly again, though she lacks the materials and believes Ryza can find them. Ryza indeed was able to find as well as synthesized the Prosthetic Arm, and and tries to give it to Empel.

Empel, seeing the tool, instantly recognizes she got the materials from Klint Kingdom's and refused to use it. With the help of Lila, she tells Ryza about Empel's history of how he got his arm broken, and reminded of his promise when both had first met. She wanted Empel to continue that oath by using the tool, of which the tool is created not by the ones he meant to destroy, but by alchemist of a good heart: Ryza. Empel finally accepts the prosthetic arm and gleefully thanks Ryza and Lila that he can now once again perform alchemy. 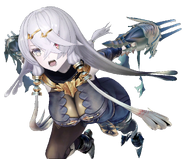 Lila and others spying on Ryza

Lila with the rest of her party