For the character appearing in Atelier Ayesha and Atelier Escha & Logy, see Linca.

"A somewhat airheaded and oblivious, yet capable secretary"
— Official description

The seventh Linca is a supporting character in Atelier Shallie: Alchemists of the Dusk Sea. She is the seventh of the eight known Lincas.

Linca is secretary who the player can buy items from. She is serious and calm, and Raoul Pireit is in love with her.

Rather than the eighth born Linca who appeared in the previous games, Atelier Shallie features the seventh Linca. The seventh Linca was separated from her sisters, the other Lincas, after escaping their underground birthplace. She was raised by Gerard Perriend, and started working for him and was taught the job of being a secretary by Nady Elminus. 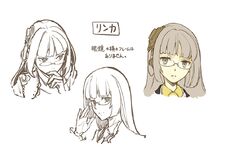