Luard is an alchemist who lived 500 years before the events of Atelier Sophie: The Alchemist of the Mysterious Book.

Luard studied alchemy with Plachta after saving their town from a drought. Eventually Plachta started exceeding him in skill. Not wanting to fall behind he found a forbidden alchemy technique called Eradication Alchemy. He started using it excessively, causing damage to the environment.

Plachta confronted Luard over the usage of the alchemy technique. After an "argument" Plachta ended up with the body of a book while Luard was split into Atomina and Meklet.

He first appears as Atomina and Meklet. They make appearances throughout the game checking in on Sophie's progress. When she unlocks the Cauldron of Knowledge, the two utilize it to recombine into Luard and start using Ablation Alchemy again along with causing environment troubles. After a battle he is returned to Atomina and Meklet.

Atomina and Meklet again appear in Atelier Firis. They give Firis a series of missions to build an airship. When they airship is built, they accompany her to Skyfaring Ark, where they discover what happened to a friend of them and retrieve his diary.

An alchemy accident recombines Atomina and Meklet into a younger version of Luard. He takes the name Alt and moves to the town of Merveille in the Adalet Kingdom.

As an Enemy Edit

Luard serves as the final boss in Atelier Sophie.

Atomina and Meklet transforming into Luard with the Cauldron of Knowledge 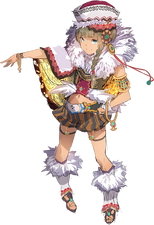 Luard and Plachta have an "argument"

Luard appearing in Etel Nepica
Add a photo to this gallery

Retrieved from "https://atelier.fandom.com/wiki/Luard?oldid=38376"
Community content is available under CC-BY-SA unless otherwise noted.