Ludwig Giovanni Arland, better known as Gio, is a character appearing in Atelier Rorona: The Alchemist of Arland and Atelier Meruru: The Apprentice of Arland. He also appears in the spin-off mobile game Atelier Questboard.

Gio first appears as a mysterious older gentleman shopping at Ms. Tiffani's store. After forgetting his wallet, he insists that she take a ring of his as payment, but Rorona steps in to pay for his order instead. Some time later, he appears in her workshop to repay this debt.

At the beginning of her 8th assignment, Rorona is requested to retrieve an item called a Raptorstein. Soon after getting this job, Gio appears again, asking Rorona to accompany him as a "bodyguard" through a walk in the wilderness. Gio takes Rorona to fight a Griffon, but Rorona is unable to defeat the monster, causing Gio to step in and dispatch it easily. He then gives Rorona the Raptorstein it dropped. After this event, Gio agrees to accompany Rorona in the future.

During the third (and final) year of the game, Gio asks Rorona to help him deal with a troupe of bandits causing trouble in the area. It is at this time that it is revealed to her that he is the king of Arland.

"Arland's former king and my dad's close friend - he's like an uncle to me. All he does is wander around, making extra work for the people around him. I just can't imagine him stuck in a chair somewhere. He's a real free spirit."
— Encyclopedia entry in Atelier Meruru, written from Meruru's point of view.

Gio can equip both capes, coats and jackets.

Gio joins during the eighth assignment. He joins at level 30, equipped with a Secret Staff and Gentleman's Coat.

Gio is a purely physical attacker which excels in single target attacks. 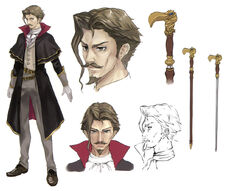