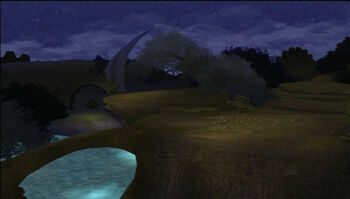 Makina Domain is a dungeon found in Atelier Meruru: The Apprentice of Arland, Atelier Rorona Plus/DX: The Alchemist of Arland and Atelier Lulua: The Scion of Arland.

Unlike previous dungeons, this special dungeon can only be unlocked through downloadable content, with the exception of Atelier Rorona Plus/DX where conditions are needed to be met for the dungeon to unlock. While this is the most difficult dungeon in the game, it is also where every item in the game can be found.

Atelier Meruru: The Apprentice of Arland[]

After downloading the dungeon and reaching 4/1 of Year 3, an event occurs where Hanna calls out to Meruru to give her a mysterious book called 'Infinite Alchemy 1' filled with "gibberish" to take a look at. After taking a look at it, Meruru discovers it's an Alchemy book filled with unusual recipes. When asked by Meruru about where she found this book, Hanna tell her she had wandered off to the east a few days ago and found a weird place where the space-time continuum felt messed up but had pretty rare materials. Meruru then asks for the location of this area because she believes that since she found the first volume, the second one must still be there somewhere. Hanna marks it on her map, but warns her to be careful due to seeing some powerful monsters lurking around there.

Once there, Meruru finds herself in a mysterious ruin filled with massive broken gears scattered about underneath a night sky, and notes that the atmosphere does feel different than from the previous areas she's visited before venturing onward. After getting across and reaching the other side, Meruru and Co. deal with the first boss, Tower's Devil, before moving on to the second area. In the second area, A fog surrounds the area a bit and there are more gears like the first area, but are in working condition. Along with that, there is a carrot patch where the second boss, Hammer Bunny x3, awaits to attack Meruru and Co. After climbing up the stairs, Meruru and Co. reach the third area and notice Squirrona, Totorirrel, and Squirmerurrel near some mini-cauldrons before noticing their presence and proceeds to attack them with their array of attack and debuffing items. After defeating them, a tired Meruru finds the other book, 'Infinite Alchemy 2', and is glad that there aren't any powerful monsters left... Only to add that she hopes there aren't any left before climbing up to the forth area. In the forth area, after climbing up some blocks and a long stairway, Meruru and Co. finally reach the top where sunlight is showing through some trees. Before proceeding though they must defeat the Heaven's Dragon before heading to the last layer, where surrounded by a thick forest along with massive chains and gears, the Machina of God, the last and most difficult boss, awaits them. Once Meruru and Co. defeats all the bosses they can safely head for the exit and clear the dungeon.

Massive preperation is needed for this dungeon, as you'll need the best attack and healing items and good traits in both weapons and armor before challenging this place.

The dungeon can only be unlocked somewhere during Overtime after meeting certain conditions. The dungeon contains slight differences in enemy placement compared to its version in Atelier Meruru, such as the three squirrel enemies being replaced.

Atelier Lulua: The Scion of Arland[]

The dungeon returns in the fourth entry as a downloadable dungeon. It can only be unlocked if the player chooses to continue after loading a cleared save file. This time, the dungeon contains powerful enemies that have levels that exceed the maximum levels that the player characters can have, thus requiring both luck and extremely gear to progress. However, the dungeon also contains the highest quality materials as well as new ones.

Once the player continues, Mana will inform Lulua at the atelier about the location and asks the alchemist to meet her there. When Lulua enters the dungeon, Mana transforms to her true form and challenges Lulua and her party, leaving the alchemist no choice but to fight.

After the fight, Mana expresses her joy and awe to strength of the now-exhausted alchemist and says that Lulua is strong enough to fight the creature awaiting at the end of the dungeon. She also reveals that the place was originally called "Machine's Domain" and was a vital part that keeps Arland intact along with other Domain. Mana also reveals that after Ehtogalaxen collapsed, she started malfunctioning and lost control, eventually damaging the place during her rampaged. It was only until Meruru defeating her as the Machina of God that she rebooted and regain her sense of self. After the explanation, Mana wishes Lulua good luck with the creature at the end of the place.

When Lulua reaches the end, she sees a creature similar to Wind Stone named "Spirit Bird Shadow", who wishes to challenge Lulua to a fight to measure her strength, leaving the alchemist no choice but to comply once again.

After the fight, the Spirit Bird recognizes the alchemist's strength but mentions that strength alone isn't enough for someone who "bears the burden of the future" as Lulua carries the future of the land to her shoulders. Before leaving, the Spirit Bird also tells Lulua to challenge him again after she becomes stronger. This leaves bewildered on what the creature meant before Piana clarifies the meaning to Lulua. Lulua wonders on what about her is interesting before Mana answers by saying that everything about her is interesting and convinces the alchemist to grow stronger and become a great alchemist, which Lulua gladly accepts.

As Lulua leaves the scene, Aurel comments about her being easily manipulated while Mana compliments her simplicity as part of her charm, to which Rorona agrees, stating her support for her daughter.