Mana Khemia: Alchemists of Al-Revis (マナケミア ～学園の錬金術士たち～, Manakemia ～Gakuen no Renkinjutsushi-tachi～) is the 9th game in the Atelier series, and the first of two Mana Khemia titles. 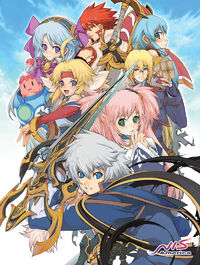 The game's main focus on is the lead protagonist, Vayne Aurelius, son of a legendary alchemist named Theofratus who had disappeared sometime after Vayne's birth. Vayne, since then, had led the life of a hermit, his only companion being a Mana in cat form named Sulpher. Vayne is invited to the Al-Revis Academy for alchemy training by Zeppel, one of the professors there. He is quickly indoctrinated into the school by becoming part of an atelier led by Flay Gunnar (an older student who is known as The Defender Of Justice) along with two other students, Jess (a clumsy girl who is nevertheless adept at alchemy) and Nikki (an impulsive beastgirl). They are soon joined by Pamela (the school's resident ghost), Anna (a 12-year-old master swordsman), Roxis (the son of a famous family of alchemists who is quickly forced to join the workshop by Flay) and Muppy (an alien the group discover on an assignment). The 8 of them are able to succeed at completing assignments and allow the workshop to prosper and learn the skills of alchemy. The game takes place during the three years Vayne is attending the school. A colorful cast of characters accompany him as he learns of his past, his skills, and the world. All seems to go well until a dark force begins sending other students after Vayne, who becomes increasingly aware of how important he is.

Throughout the game, your characters must synthesize many items for school assignments. However, Mana Khemia has a unique item synthesis system, unlike most other popular RPGs. Each synthesized item can be made in a variety of different ways with a variety of different materials to different effect.s Generally speaking, using higher-quality materials will yield better results, but that depends on your goal. In addition to this, there is also an "item level" mechanic which can also change the outcome of your created items. Again, generally speaking, a higher item level (in-game: E-level) will produce a better item, but there are times when a deliberately low item level is required. E-level is decided by the beginning E-levels of all the component materials, then adjusted by timed roulette-esque minigame.

Both alchemy and combat are necessary to grow the characters. Unlike typical role-playing games, there are no experience points or characters levels. Instead, through combat, the characters earn "action points" which are used in the character-specific "grow book" to unlock new skills and character bonuses such as additional health or mana points. However, these bonuses are tied to completing the recipes for specific items in that book. The grow book is presented as a graph of synthesizable items. The bonuses for an item cannot be acquired using action points until an adjacent item on the graph and the item itself has been made

Like most console RPGs, Mana Khemia has a turn-based combat system. Unlike other games, however, Mana Khemia gives you the same advantages that the computer has, specifically predicting order-of-action. When selecting an attack in battle, you can see immediately how that will affect when your character will be able to act next. This is done through a card-stack display at the top of the battle screen. In addition to timing help, the card stack allows for co-ordinating time-based attacks. Many spells in the game will not do all of their damage (or healing) upfront. Instead, they will add cards into the stack and activate several times over the course of battle.

Completion of classes is an important gameplay element. The class system is set up with a mission system, and the game requires you to attain a set number of "units" by completing courses. By getting a higher mark in a course, you earn more units.

The soundtrack was composed by Ken Nakagawa and Daisuke Achiwa. It was released May 30, 2007 in, Japan by Team Entertainment.

A port for the PSP system that was released in Japan on September 25, 2008 under the title Mana-Khemia ～Gakuen no Renkinjutsushi-tachi～ PORTABLE+(マナケミア～学園の錬金術士たち～PORTABLE+), and North America on March 10, 2009.

There are added features like multiplayer battles, Jump Start function to allow the game to load faster, and more items that can be synthesized. In multiplayer battles, enemies may drop rare items that cannot be found in the main game. Student Alliance was generally given lower reviews than its PS2 counterpart due to its additional loading times, but this can be remedied by playing the download rather than the UMD or using the install function.