"This is just the beginning. I will make you suffer Rorona!"
— Meredith

Meredith Alcock is the main antagonist in Atelier Rorona: The Alchemist of Arland.  As head of the Ministry of Arland, Meredith strongly believes in the industrializing of Arland. Meredith's ultimate goal is to rid Arland of alchemy in order to make room for more factories, which Meredith believes would be more beneficial to Arland. He hires Sterkenburg Cranach to deliver the assignments that Rorona must complete, in hopes that she will fail and that the workshop will be forced to be shut down.

Meredith will stop at nothing to reach his goal and is a vindictive, manipulative and stern individual. Although he has great power within Arland, Meredith goes to extreme lengths to see the foreclosure of the workshop. As Rorona succeeds, Meredith's anger grows and he tries to take matters into his own hands. He goes beyond his legal obligations and abuses his power to attempt sabotage upon Rorona in order to stop her from progressing.

Many people do not share Meredith's views, although they are powerless to stop him, given his high standing within Arland's political system. Many people, including Sterk start to suspect foul play. Meredith's own son disregards orders given to him by his father to aide in sabotage, after realizing the drastic measures that his father is willing to take to reach his goals.

Exhausting his options and constantly failing to stop Rorona, Meredith will be convinced that Arland needs alchemy after Rorona successfully completes all of the assignments if the player recieves a "normal" ending or better. 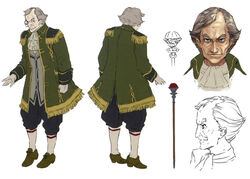 Concept Art for Atelier Rorona
Add a photo to this gallery

Retrieved from "https://atelier.fandom.com/wiki/Meredith_Alcock?oldid=36501"
Community content is available under CC-BY-SA unless otherwise noted.