"My name is Merurulince Rede Arls, but everyone just calls me Meruru!"
— Meruru, Atelier Meruru

Princess Merurulince "Meruru" Rede Arls is the main protagonist of Atelier Meruru: The Apprentice of Arland. She also appears in the remake of Atelier Rorona: The Alchemist of Arland, Atelier Rorona Plus. Outside of the Arland series, she appears in Atelier Lulua: The Scion of Arland and Nelke & the Legendary Alchemists: Ateliers of the New World

Tired of sheltered castle life, the princess of Arls seeks a life of adventure and excitement. Princess Merurulince (known simply as "Meruru") is a curious girl with a friendly and bubbly personality. She often ignores her royal duties and sneaks out of the castle, much to the dismay of her father Lord Dessier and her mentor Rufus.

She is fascinated with the outside world, and has taken a keen interest in the study of alchemy. Meruru's dream is to become an alchemist under the teachings of Totooria Helmold. Meruru often sneaks to "Miss Totori's" workshop, knowing that her father will not willingly let her practice alchemy. Meruru is not an individual to give up on what she believes in, and she tries desperately to sway her father's opinion on her future as an alchemist, despite his constant disapproval.

Meruru is the main protagonist. With the help of Rufus as an advisor, Meruru will gain permission from her father to become an alchemist, under the circumstances that it will benefit the kingdom. It will be Meruru's royal duty to develop her kingdom in three years time, before Arls merges with Arland and become part of the republic.

Enlisting the help of her friends and adventurers from Arland, Meruru will synthesize, explore, build and battle her way to making a bigger and better kingdom.

In the post game storyline, Totori together with her student Meruru appears from the future. This presents the new goal of helping the two return to their own time. Meruru, along with Totori, soon become playable party members and they also have additional outfits available.

The player needs to craft a specific set of items and also fight a boss to achieve this goal. Totori and Meruru will return home to their own time no matter if the player achieves the goal or not, but if the player succeeds they will be rewarded with a scene featuring a new illustration. Meruru will also give Rorona a recipe book containing items from the future, such as Pinwheel.

Meruru successfully developed Arls into a modern nation, and it merged with the Arland Republic as planned. This led to her losing her title as princess and official royal status, but to the people of Arls and her fans she's still known as "Princess Meruru". One of these fans is Elmerluria "Lulua" Frixell.

Meruru has become a travelling alchemist, and has inherited Totori's workshop in Arls as her own. Meruru's impulsiveness causes her to constantly set off on new adventures, but she will come rushing back to Arls if her strength is needed. Although Meruru cares deeply about Arls, it embarrasses her that people still treat her as if she was the princess. Her love of mushrooms remains as strong as ever, and she'll ask Lulua to bring her some.

She's available as a party member through DLC, and she now fights with a sword. Like Totori, she cannot use Interrupt, but is able to use equipped items as follow up support instead.

Unlike other playable characters in Atelier Meruru, all of Meruru's skills are passive. She possess no skills in which she can use directly in battle. In Atelier Rorona Plus, she can use both items and active skills. 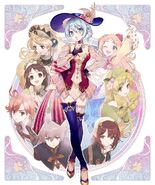 Silhouette of an older-looking Meruru in Atelier Lulua.