"Sophie's best friend. She was born into a decently well off family, and she's a talented girl capable in both studies and fencing. She's very serious about everything, and acts politely. She and Sophie are childhood friends, and while she's always pointing out Sophie's faults, she's also very willing to help. She actually has quite a liking for singing, and can be found practicing in secret at times. She often visits Sophie's house to eat sweets, but she also cleans the place up in exchange."
— Official description.

Monika Ellmenreich is a character in Atelier Sophie: The Alchemist of the Mysterious Book.

She is Sophie's close friend from childhood.

Monika is Sophie's childhood friend and one of the first characters to help Sophie.

She secretly enjoys singing and eventually the Kirchen Bell Café hires her to sing. Although she reluctantly declines it at first, Sophie encourages her to sing.

Monika courageously sings that night and finds herself having fun. She hopes she can sing professionally. After Monika's event, the player can ask her to sing at the Kirchen Bell Café at night.

Monika uses rapiers as her weapons of choice. The rapiers she uses are:

In some of her skills she's seen wearing a shield alongside the rapier. However, these can't be equipped and are only considered part of the animations.

She can equip mainly sweets and obstructing items. 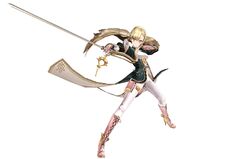