Nelke & the Legendary Alchemists: Ateliers of the New World

Nelke & the Legendary Alchemists: Ateliers of the New World

Town-building role-playing game
Nelke & the Legendary Alchemists: Ateliers of the New World (ネルケと伝説の錬金術士たち ～新たな大地のアトリエ～, Neruke to Densetsu no Renkinjutsushi-tachi ~Arata na Daichi no Atelier~) is a spin-off game in the Atelier series The game released for PlayStation 4, Nintendo Switch, and PlayStation Vita in Japan in 2018, and released on the west in winter 2018-2019 for the PlayStation 4 and Microsoft Windows.[1] The Nintendo Switch version released in the west in March 26, 2019.[2]

The protagonist of the game is Nelke von Lestamm, a noble in charge of developing the frontier town of Vestabalt. Nelke is not an alchemist herself, but will have the aid of alchemists from all previous Atelier titles.

The inhabitants of Westbald are made up of various returning characters from the series, but which have drastically fewer events, minor roles, and are only represented by a single portrait image.

In June 2018, an Atelier character popularity poll featuring 40 of the characters from all the main titles in the series was launched in Koei Tecmo's website. After voting in the poll, a teaser was shown with all the characters and the following text: "A new development for the Atelier series on June 14, 2018!? To a 'new land', together with them."[4][5]

In June 12, 2018, two days prior to the expected announcement date, the magazines Famitsu and Dengeki revealed Nelke and the Legendary Alchemists as the next Atelier game, to be released in 2018.[6] It was also mentioned that this game will be the first one of a "Legendary Alchemists" spin-off sub-series.

NOCO, who previously worked in the Mysterious trilogy, will be in charge of the illustrations of this game.

On 13 June 2018, Koei Tecmo America announced that the game was going to be released outside Japan for the PlayStation 4, Nintendo Switch and Microsoft Windows (via Steam).[7][1] 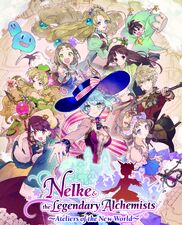 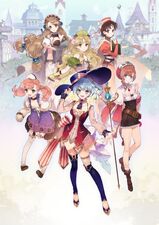