Ayesha's Workshop (after being rescued)

Nio Altugle is a supporting character appearing in Atelier Ayesha: The Alchemist of Dusk and Atelier Escha & Logy: Alchemists of the Dusk Sky.

Nio is the younger sister of Ayesha Altugle, the main protagonist of Atelier Ayesha: The Alchemist of Dusk. Nio is a bright young girl who helps her older sister with her herbalist's workshop. While collecting herbs one day, Nio mysteriously disappears, and is never seen or heard from again. A gravestone is placed where Nio had disappeared, and she is assumed dead. Her whereabouts are unknown, although most people believe that she was "spirited away", or swallowed up by the ancient ruins.

While visiting Nio's grave, Ayesha sees a figure who strikes a resemblance to her missing sister. She believes it to be Nio, and starts an adventure to find her missing sister, now holding hope that Nio is alive. Keithgriff tells Ayesha that Nio may still be alive somewhere - just not in a place that Ayesha can "reach with her hands."

In Atelier Escha & Logy: Alchemists of the Dusk Sky she has once again been separated from her sister during a journey, and came to Colseit in order to investigate The Unexplored Ruins. Nio is now a traveling apothecary, and during her journeys she is making a living from selling medicine and sometimes helping out in various shops. She looks 15 years old physically, but she is very knowledgeable. Making sweets is her hobby.

Even if Nio has regained her human body and is no longer in a spirit form state, it appears as if beings in a similar spirit state can sense and communicate with her.

Nio becomes the story's main focus. Ayesha's main goal is to find out where her sister is, and if she is indeed still alive. Nio appears as a glowing spirit, although she still possesses her human body.

After Keithgriff tells Ayesha that Nio is in a place that she can't physically touch, Ayesha makes it her goal to gather clues as to what that could mean. Ayesha realizes that her disappearance may have something to do with the glowing flowers that Nio is somehow connected to. In each place that Ayesha discovers glowing flowers, she will see Nio and will get to speak with her briefly before she disappears.

After Ayesha collects enough flowers, she presses them together and creates flower oil. The overwhelming scent draws Nio to Ayesha's location. After this, Nio visits Ayesha at the workshop in Vierzeberg on a regular basis. She can only visit at night, and she is still no closer to knowing where she is or how she got there.

After the player has saved Nio, she can be added to the party and is recruited at Ayesha's Workshop. The player can also buy items from her at the bazaar after she has been saved.

Nio is a traveling apothecary who makes money from selling medicine and sometimes helping out in various shops. She came to Colseit in order to investigate The Unexplored Ruins.

When Nio is introduced, she has already arrived to Colseit and has been given a place to stay by Escha's family. Due to certain circumstances Wilbell looks after her, but Nio earns her own money so that she doesn't need to bother Wilbell.[1][2] Escha calls her "Miss Nio", which she would like her to stop doing, since she finds it a little embarrassing.

Nio is introduced early in the game when Escha and Logy were delivering the windmill parts for the first assignment to Clone in the apple orchard. Escha and Nio already knew each other prior to the event, but Escha introduces her to Logy. Nio also mentions that she is selling medicine ingredients, and if there is anything they need for work they can tell her. Later in the game, Nio reveals to Escha and Logy that she can hear a mysterious voice in Colseit that no one else seems to be able to hear. Nio later finds out that the voice is Flameu, and joins Escha, Logy, and Clone, in their attempt to save Flameu.

Nio is also looking for her sister Ayesha, and thinks about her often. As the person her sister is together with sometimes does "absurd things", they are now travelling separated from each other. Nio is now travelling with Wilbell, who also aids her with gathering information about Ayesha's whereabouts.

It's possible for the player to buy items from Nio's shop (located in "Apple House"). Nio will also be the one to visit Logy in the workshop in the scene where an ending will be possible to choose by the player, if Logy is the chosen protagonist.

Nio is a playable character in Atelier Escha & Logy Plus. In this version, Nio will officially join the R&D team to search for her sister while aiding Escha and Logy in their investigations. She uses the false name "Nio Panatugle" (a game of words between Pana and Altugle) to prevent the authorities from discovering her relationship to Ayesha.

In the base version of the game, Nio appears along with Ayesha at the end of the game as they rendezvous with Keithgriff.

In Atelier Shallie Plus/DX, Nio does not appear at all, as Ayesha had left her in Colseit before making her way to the Stellard region. After his deployment to Stellard, Logy informs Escha that Nio has returned to the Malier family's orchard and is now assisting with the apple harvest.

When Escha and Logy meet Ayesha in Chapter 8 and learn that she's Nio's older sister, they ask her why they've separated again; Ayesha tells them that she left Nio in Colseit, a town she already knew and liked, due to the danger inherent in crossing the Dusk Sea. During Chapter 9, Escha deduces that this wasn't entirely true, surmising that Ayesha intentionally left Nio behind in Colseit. Escha interrogates her as to why; Ayesha tells Escha that she did so because she and Keithgriff are on the run as wanted criminals, while Nio hadn't yet decided on her path in life.

After the final boss is defeated, Escha and Logy receive a letter from Nio back in Colseit telling them that the town has had an especially bountiful apple harvest this year.

Whether Nio chooses to walk among society at large or to join her sister and Keithgriff on the run is left unknown at the end of the game.

Nio will join the party after being rescued.

In the Plus version of Atelier Escha & Logy, Nio will join the party during third assignment. Her initial level will be the same as Escha and Logy. She's a supporting character in battle, being able to heal the party members (but without the same strength as Lucille) and to raise their stats. She can also cause ailments to the enemies through her Special Support attack.

As in Atelier Ayesha, she still uses cookware as weapons.

She can only equip clothes.

She has the same recovery/support skills than in the previous game, with other new abilities. Since Pana isn't with her, the skills involving her aren't available here.

Nio, Ayesha and Ernie in Atelier Ayesha: The Alchemist of Dusk.

Ayesha and Nio with Odelia and Keithgriff Hazeldine in "Search for the Truth".

Ayesha and Nio in the "Sisters Thereafter" ending. 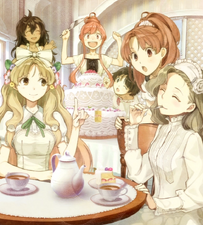 Nio in Atelier Escha & Logy: Alchemists of the Dusk Sky.

Nio with Escha and Logy in Atelier Escha & Logy: Alchemists of the Dusk Sky.

Nio with her sister in Atelier Shallie: Alchemists of the Dusk Sea.