Odelia is a character appearing in Atelier Ayesha: The Alchemist of Dusk and Atelier Shallie: Alchemists of the Dusk Sea.

Odelia is an automaton (a mechanical doll created with alchemy) who works at the ancient library Zweiteturm. There are over 80 million books in the library, and Odelia can verbally recite each one if requested. Her name was given to her by her creator (whom she refers to as "Master") who has now left the library in her care.

It's unknown how old she is or how long she has worked at the library, but she is extremely knowledgeable and helpful. Although, she has begun to have troubles with her memory. It can be assumed she is at least over 900 years old.

Odelia is bored that nobody comes to visit, and she appears to be the only person working at the library. The last order her master gave her was to guard the library. She later accepts Keithgriff as her new master. She does not need to eat or sleep, but has a guilty pleasure for anything sweet.

She is available as a playable character by purchasing downloadable content.

Odelia helps Ayesha finding a book about rare flowers when she visits the library as she searches for ways to help Nio. She lets her check the book out, but asks Ayesha to bring it back within one year. It's later revealed that she is a part of "The Two Cradles", with Zweiteturm being the cradle for protecting knowledge.

She often feels bored, and asks that Ayesha come and visit her. She can be found at the entrance of Zweiteturm, where the player can also buy items from her.

She is currently following Keithgriff as he is her master. She also picked up some of her master's tics. She accompanies Keithgriff throughout the story line, but does not take many initiatives on her own.

Albert Perriend is deeply in love with her throughout the game, but when he confesses his love, she doesn't understand either him or the gift he gave her.

Odelia is available as a playable party member by purchasing downloadable content. Odelia is described as being an "ideal supporting party member" in battle. She becomes recruitable after the event "Mysterious Mansion" is cleared and can be invited from the entrance of Zweiteturm. 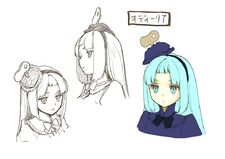