"Sophie's best friend, and the son of a grocer. He's an optimistic guy who doesn't care about minor details. He has a special ability to hear the voices of plants, and his knowledge of plants is also vast. Oskar loves plants, and he's quite passionate when it comes to them. He's lazy when it comes to exercise. He's always filled with confidence, but caves in rather easily."
— Official description from Atelier Sophie.

Oscar is Sophie's childhood friend and one of the first characters to lend his aid to Sophie. His dream is to have a variety of plants around Kirchen Bell after listening to the Eternal Blossom's wish.

After Sophie goes to him for advice on traveling, he says he'll travel with her to keep her company and discover more plants. Oscar goes to Logix to upgrade his shovel to prepare for the journey.

A young man who holds the power of talking to plants. As he was born in the same village as Sophie, they once went on adventures together. Though he used to be chubby, he became slim as he went on his journey. Although he goes through life at his own pace, compared to his childhood self he is much better.

He will be available to recruit upon entering Lebenwald for the first time. He starts at level 25.

He uses axes as primary weapons, and also can equip staves and guns as secondary weapons.

He can equip light, medium and heavy armors. 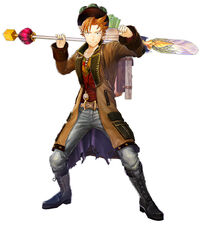