Pamela Ibis (パメラ・イービス) is a recurring character in the Atelier series.

Pamela is a cheerful and flirty ghost who has played various roles. She has appeared in fourteen of the core games.

One particular recurring point with Pamela in each of her appearances is that she can never recall the circumstances surrounding her death. It never comes to light, even through sidequests related to her, and is always kept a mystery (with the exception of Atelier Iris: Eternal Mana and Atelier Iris 3: Grand Phantasm). Despite the rather dark ambiguity that involves her unknown demise, she has grown accustomed to being a ghost and makes the most of her spectral existence. This is often noted in that she enjoys scaring others as a practical joke and is always in good spirits.

In Atelier Iris, Pamela appears as a ghost who is friends with some of the children of Kavoc.

Pamela can't remember how she died, or where her corpse is, so she wanders around hoping to find it and restore her lost memories. Despite this gloomy mission, she remains upbeat. She enjoys being a ghost and sneaking up on people. She also becomes smitten with Arlin if you talk to her while he's in your party. Despite Arlin's straightforward words of rejection, after an initially dramatic outburst by Pamela where she believed Arlin to be a ghost like her, she becomes her upbeat self again after realizing he's alive, and requests that they go out once he's a ghost, too.

Pamela Ibis encounters Edge Vanhite and his party at the Grimoire Castle as the librarian and occasionally provides them with help.

Atelier Rorona: The Alchemist of Arland[]

Pamela is a shopkeeper in Atelier Rorona.

Rorona discovered her in the Catacombs inside of a teddy bear. Pamela decided to stay in Arland, but became bored easily. She later opens up a shop next to R&T Sundries.

Atelier Totori: The Adventurer of Arland[]

She now has a physical body and has moved to Alanya due to a desire to see the ocean. She sells wares at her own store in the village. Her physical body was a sort of doll created for her by Astrid. In order to help Totori and her friends enter the Liechtein Soehnle, she offers up her ghost body as a sacrifice. Totori is shocked as, up until that point, nobody in the village of Alanya was aware that she was actually a ghost.

Atelier Meruru: The Apprentice of Arland[]

Pamela has moved from Alanya to Arls to open her own store in Atelier Meruru.

Meruru can register items at Pamela's Store. She has abandoned her human body, and has decided to go with her ghost body. She is delighted by the initial scared reactions of the people in the kingdom, as everyone where she lived before has long since grown used to her being a ghost.

She is available as a downloadable character for the Playstation 3 edition, and can be purchased from the Playstation Network. In Atelier Meruru Plus, she is recruitable as a party member after an event in Pamela's shop that will occur at least 30 days after Rorona has become recruitable.

In Trinity Universe, Pamela appears as a ghost who works at an inn on Empyria. She likes to pull pranks on others, with Prinnies being her favorite ones to pull pranks on. She is cheerful, but often sounds like she doesn't have any real opinion. She is an old friend of Violet Platane and a friend to the demon dog king Kanata. She is considered "empty-headed" by Etna, and together with Flonne, the two make up the "Broken Brain Duo".[1]

Atelier Sophie: The Alchemist of the Mysterious Book[]

Pamela is a nun at Kirchen Bell's church and will exchange items for donations of money. Unknown to Sophie at first, she died a long time ago and is actually a ghost. She knows the citizens of Kirchen Bell very well and is often seen taking care of a group of children.

Atelier Firis: The Alchemist and the Mysterious Journey[]

By the time of Atelier Firis, Pamela has left Kirchen Bell in order to get the nun license. The player finds her in Reisenberg, where she has opened a shop in order to make money so she can return to Kirchen Bell.

Atelier Lydie & Suelle: The Alchemists and the Mysterious Paintings[]

While trying to return to Kirchen Bell, she chooses the wrong wagon fare and ends up in Merveille instead. She stays at the local church as a nun and sells various items in order to pay to go back to Kirchen Bell. After Lydie and Suelle discover that Pamela is actually a ghost, Suelle is develops a strong fear of Pamela, due to her phobia of ghosts.

The player must finish the Rasen Pudding quests from Bascila in order to trigger an introduction to Pamela Ibis. Shortly after that dessert's success in the island, the Mysterious Adventurer Quest is unlocked and Ryza will interact with a girl in an amour named Pamila in Ryzen Port.

She comes to Kurken Island as a traveler based on a rumor that the island has a wonderful dessert. Ryza recognizes this pudding that was from Bascila which is called Rasen Pudding (of which she can also make through alchemy). Knowing this information, Ryza told Pamila the directions where she can find one. As she leaves, Ryza feels something a myterious aura lingering from her, and wonders where she is originally from.

Some time later Ryza once again sees Pamila in a good mood hanging around the fields in Rasen District, gleefully happy as she's able to get her hands on the Rasen Pudding as many times she wants. With Pamila staying temporarily in Bascila's place for the meantime, both continued to have a short talk about her happenstance of being in the island and her venturing. Pamila states she cannot remember how long she's been travelling though she has been doing it for a while, and mentions she's doing it by just floating one place to the next. Her last statement made Ryza think the she is a ghost.

Pamila does not attract the attention of monsters and only wears her armor on the advice of a friend. She later participates in a treasure hunt but loses interest because the contents of the treasure chest weren't cute.

Pamila appears again in Atelier Ryza 2 with a different hair color. She has returned to the capital to spread the word of Kurken Island's specialty pudding. She is later recruited into the Dolaria Bandits. It is revealed her full name is Pamila Ibis. 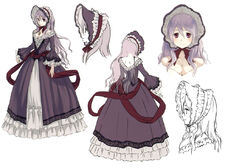 Pamila introduces herself to Ryza

"Pamila", as seen in a pre-order card for Atelier Ryza (1)

"Pamila", as seen in a pre-order card for Atelier Ryza (2)