President of the Cooperative Union

"A young and hot-blooded leader who manages ruffians"
— Official description

Raoul Pireit is a character in Atelier Shallie: Alchemists of the Dusk Sea.

He is the current president of the Cooperative Union and a central figurehead for the citizens of Stellard. His father was the late leader of the Union, and he was put in charge at a young age. He sees everyone working with the Union as a family.

He is deeply trusted by treasure hunters, and his experience is widely acknowledged by the people.

When Shallistera arrives at Stellard, he offers a mutual aid collaboration to her. He also looks after Shallotte.[1][2] 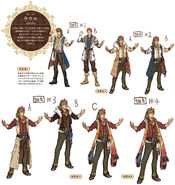