Ryza lives on Kurken Island together with her mother and father. Rather than to help out on her parents' farm she wants to sneak away to the mainland. She spends her days with her childhood friends Tao Mongarten and Lent Marslink, and acts as the leader of their group.

When Ryza and her friends are saved from a monster on the mainland by Empel Vollmer and Lila Decyrus, she is introduced to alchemy and becomes Empel's student. Ryza starts using her new skills to help townspeople and adventure on the mainland, but her mother disapproves of her hobby. She eventually builds a secret hideout together with her friends, so that the team can focus on their goals away from their parents and the island. The hideout is named "Atelier Ryza", and becomes her alchemy atelier.

Ryza and her friends have a rivalry with Bos Brunnen and his underling Lumbar Dorn. They used to be friends when they were younger, but after an incident where a young Ryza was at the risk of drowning their friendship fell apart.

Over the course of a single summer the friends share many adventures. This leads them to both face the dangerous Philuscha, but also grow as individuals. Ryza then returns to her ordinary life until three years later, when she journeys to the capital and gets caught up in yet another grand summer adventure.

She is a young woman around her late teens with short medium brown hair with light-brown wide eyes, and a delicate oval face. She has slightly large breasts that went well with her slender yet curvy-slim frame with her having supple thighs and a decently rounded behind to have a slight hourglass figure.

She wore, however, a white sleeveless strap crop shirt with sleeveless yellow vest jacket with white somewhat fluffy detached sleeves on her arms. She also wore a single brown leather glove on her right hand, a dull-golden colored star pendant around her neck, a white beret hat with a black ribbon on it, a bronze musical note pin within her hair, a brown leather belt with a squarish golden belt buckle within red short-short pants, and white thigh-highs stockings with brown leather low-heeled boots, and lastly a brown thigh-holster on her left leg.

"An ordinary girl whose unique characteristic is just that - ordinary. Ryza has a wild and tomboyish personality with a strong sense of justice. While she can be stubborn in her convictions, her heart is in the right place. Her whole world is turned upside down during an extraordinary encounter..."
— Official description[3] 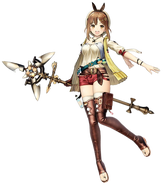 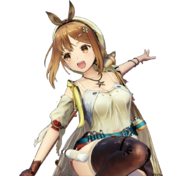 Ryza in her Summer Fashion outfit
Other Artworks

Ryza with her friends in Pixie Forest 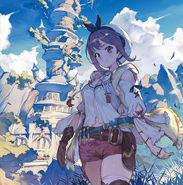 Ryza with the Holy Tower of Pynnor

Ryza with Tao and Lent

Ryza with her beach clothes

Ryza on the Capitol