Revy Berger is a playable character in Atelier Firis: The Alchemist and the Mysterious Journey.

Revy is a wandering swordsman. People tend to find his apperance frightening, and for the most part he has a serious personality. However, he can also have a bit of a careless side and his special skill is actually housework.

His goal with his travels is simply "becoming strong", and he searches various places for weapons and devices.

In Atelier Lydie & Suelle: The Alchemists and the Mysterious Paintings, a NPC states that he is a famous chef that started many successful restaurants and is the author of "Revy's Luxury Dinners". Firis imitates his way of speaking at times. 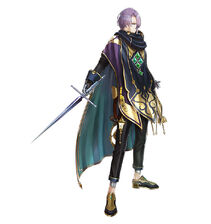 Revy ending
Add a photo to this gallery

Retrieved from "https://atelier.fandom.com/wiki/Revy_Berger?oldid=36926"
Community content is available under CC-BY-SA unless otherwise noted.