Romauge is a dancer from the south. Her exotic style and dark skin resembles My Sextans, who is also from a southern country. She can be found dancing at taverns. Her dream is to live a happy family life.

Romauge is one of the most important characters in Elie's journeys. She provides valuable information and flags necessary to meet Marlone, an opportunity to raise Elie's inclination towards romance paths, as well as has an ending dedicated to her friendship and Elie's potential musical talents. She performs at the tavern every day that ends with a 0 or 5, and can be recruited as an adventurer.

In the ending with Romauge, Elie leaves alchemy behind to become a travelling performer together with her.

Romauge has once again found herself in Salburg and is a possible party member for Elie. Roumauge first mistakes Fairy as Elie's child.[3]

Romauge has left Salburg but can still be encountered in the neighboring city of Glackenburg. She is currently working at the bar in Glackenburg. She can only be encountered by Elie, but once she's been introduced any of the three protagonists can hire her. Her initially friendship with Anis will start out high.[4] She can charm enemies with her special attack.

She will ask the player to bring her along to the Oasis, and an event illustration will be shown if the player does so. Romauge comments that the beautiful oasis would be a perfect place to spend time with a partner, with Elie (or Marie) being surprised at the idea. Romauge tells her that her passion for alchemy is good, but that she also needs to relax sometimes, and open up her heart to truly see and understand the world. Romauge then invites her to dance in the beautiful scenery.

She also appears in the Fantastic Idea-type ending. 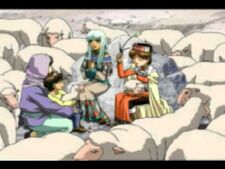