Rorolina "Rorona" Frixell is the main protagonist in Atelier Rorona: The Alchemist of Arland, and is a supporting character in Atelier Totori: The Adventurer of Arland, Atelier Meruru: The Apprentice of Arland and Atelier Lulua: The Scion of Arland.

Rorona is a world famous alchemist known all across Arland. The genius alchemist Astrid Zexis once helped her family through a deadly illness. Years later, Rorona has become Astrid's student in order to pay Astrid back for the kindness that she once showed Rorona and her family.

Rorona grew up in Arland with her parents, and is the childhood friend of Cordelia and Iksel. She is portrayed as a somewhat childish person, who is easily excitable and clumsy. She struggles when she begins practicing alchemy, and is frustrated that Astrid doesn't help her learn. Rorona has a big appetite, and a seemingly bottomless stomach. Pie making is her number one hobby, and she dreams of one day opening up a pie shop, but she keeps her ambitions a secret, after Astrid forbids her from baking pies.

As Rorona grows up, her alchemy skills improve, and she starts to travel around Arland. She begins teaching others how to do alchemy, although she's self-conscious about her teaching skills. She's very proud when she teaches Totori how to successfully synthesize something, and claims Totori as her first successful student. She even becomes successful enough to create a Chim.

Although she's aged, Rorona still remains very childish, and is enjoying her freedom to travel around Arland, taking some free time away from the workshop. She loves anything cute, and likes to give everybody she meets a "cute" nickname, although most people don't appreciate it.

Prior to the events in Atelier Lulua: The Scion of Arland, Rorona adopted Lulua as her daughter.

Rorona is the main protagonist, and the character that the player will control. After going into Astrid's care, Rorona begins to learn about alchemy. She works at Astrid's workshop, although she doesn't get to learn much about alchemy because Astrid often refuses to take requests from the people of Arland.

Business is slow, and the workshop is on the verge of being closed down by the Ministry. Astrid changes the name of her workshop from "Atelier Astrid" to "Atelier Rorona" and entrusts Rorona with the task of assisting the people of Arls and ensuring that the workshop doesn't get closed down. Rorona is hesitant at first, but is determined to save the workshop and learn more about alchemy.

Throughout the course of the game, Rorona and her companions will complete tasks for the Ministry. Rorona has a set amount of time to compile enough evidence that alchemy is needed in Arland. Rorona can invite her companions to travel with her outside of Arland while she gathers materials and fights monsters. The player's actions will determine Rorona's fate, the game's ending, and the in game events.

6 years after the events of Atelier Rorona, Rorona is now a very distinguished and respected alchemist. She's travelling Arland in search of Astrid and Hom who have disappeared. Sometime in her travels, she collapses and is found by Atelier Totori's main protagonist Totori. Rorona is brought back to Alanya where she is taken care of by the Helmold family. Totori shows interest in alchemy, and Rorona decides to take Totori in as a student and teach her alchemy.

Several years after this event, Rorona has floated down river to Alanya Village and is fished out of the water by Totori's father Guid. At this point, Rorona has given up on finding Astrid, and decides to help Totori look for her mother instead. She gives Totori a cauldron at her workshop, and also creates a Chim as a gift for Totori to assist her with alchemy. Rorona is also available as a party member to accompany Totori in her travels and can be recruited from her workshop in Arland.

Rorona was summoned to the kingdom of Arls to assist with the kingdom's alchemy needs. There were complications however, and Totori was sent in her place. There are several cut scenes in the game before Rorona is introduced that are flashbacks from Atelier Totori, as Totori tells Meruru all about her teacher.

During the time between Atelier Totori and Atelier Meruru, Rorona has managed to find Astrid and her Hom. The three of them show up at the door of Totori's workshop in Arls. Astrid explains that she was looking for Totori, and immediately came to Arls once they learned of her whereabouts. Totori is shocked to find that Rorona is now an 8 year old girl after drinking from a Youth Potion that Astrid gave her, which was supposed to turn Rorona 14. Astrid says that she plans on working on a cure to turn Rorona back to her real age, and hurries off, leaving Rorona in Totori's care.

Rorona will draw pictures for Meruru that are actually alchemy recipes. She will also eventually become a recruitable party member, and will be available to recruit if you speak to her at the workshop. She is significantly weaker than she was in the previous two games, but will still be able to use items like an alchemist.

Rorona is the adoptive mother of Lulua. She has opened up a second workshop in Arklys in addition to the one in Arland. This serves as her and Lulua's home, but due to her work as an alchemist she spends a lot of time away from her family. Lulua looks up to her mother, and the two have a good relationship despite all the time spent apart.

Rorona will join the party and aid Lulua in her quest.

Rorona uses staves in battle. Her skills are a blend of both offensive and supportive.

Like the original game, she's available from the start. She equips staves, and she uses offensive magic abilities channeled through the staff. She's also the only character that can use items until the "Overtime" period.

She starts at level 1, equipped with an Alchemy Staff and Normal Threads. 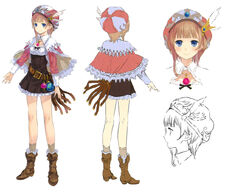 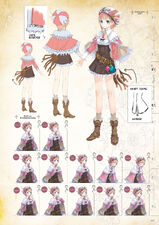 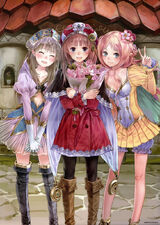 Artwork of Totori, Rorona and Meruru. 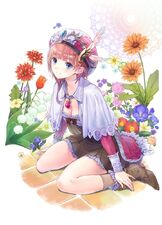 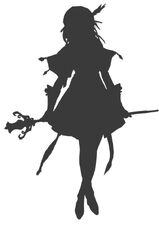