Rosemia is a character in Atelier Shallie: Alchemists of the Dusk Sea.

Rosemia is a calm and mysterious woman who wanders the Dusk Sea as a Collector, searching for various things in order to make a living. Her job also involves burying the ones who perished in the Dusk Sea and taking their belongings to sell, as well as taking those who are still alive back to the city on her ship. Because of her personality, most people have a hard telling what she's thinking and through Rosemia's age hasn't been revealed, a few scenes imply that she's been living for a long time, as she seems to very knowledgeable about the region.

Later in the game, it's revealed that Rosemia is actually a witch like Wilbell who has lost most of her magic after throwing it away after a tragic incident centuries ago.

Rosemia first appeared in the Solice Trade Camp and later in the harbor in Stellard, selling various items, gear, and even recipe books from her "customers". She is seen as a rival by Katla as a merchant due to her trying to steal her customers, but points out the reason for that is because she sells rare goods for a reasonable price, rather than expensive junk like Katla does. Due to her extensive knowledge of the regions, the Shallies come to her for advice now and again, such as finding a way to get past the illusion trap in the Ghost Ship and even tells them about the legend of the Castle of Mirages and also gives them a vague clue on how to enter Geofront by using the scattered automations.

Later, Lotte asks how she became to be a Collector. She tells them that she once had someone important who was a sailor that perished somewhere in the Dusk Sea. Heartbroken, she searched high and low in hopes of finding a memento of something to remember him by. Along the way, she began to realize just how calming the job was and began her life as a Collector, though she wished that she could find the sailor's ship. After searching the desk in the Crew Quarters on the Ghost Ship, both Shallies come across an old picture of a younger Rosemia with the sailor. After they delivered the picture and nameless note to Rosemia, along with telling her where the sailor's ship was, she breaks down in tears and reveals that the sailor was actually her lover centuries ago.

She goes on to say that despite knowing she was a witch, he still loved her and this made her want to throw away her magic and longevity to be with him, only to find out she made her decision too late and that he had perished. She still threw away her magic after that, believing that it didn't matter since she couldn't save him and started despising herself and the fact that witches even existed, saying that there aren't many of her kind left and tells the Shallies to be there for Wilbell, since she'll struggle with the life of a witch just like her eventually. 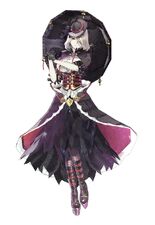 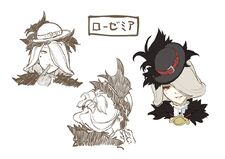